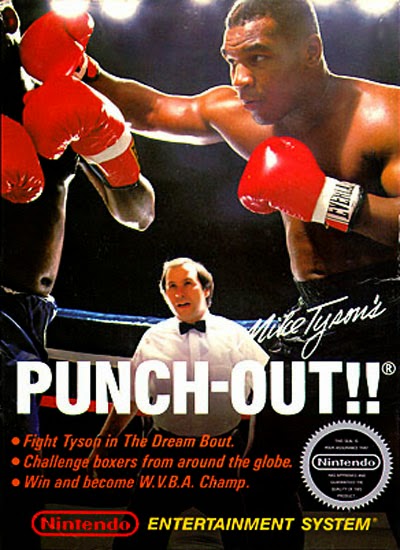 In Punch-out!! the player controlled aspiring boxer Little Mac as he fought a series of matches leading up to a challenge against the world heavyweight champion. In the American edition, this champion was real-life boxer Mike Tyson, and the game was released for the first few years internationally as Mike Tyson's Punch-Out!!. The game itself pre-dates Mike Tyson's name, of course. It was originally an arcade exclusive title created by Nintendo manager Genyo Takeda, and the NES version released in 1987 was actually the fifth iteration of the franchise.

Porting the arcade title to an 8-bit home console presented a few challenges. One problem was how to display both the player's character and the boxer they were fighting without using wireframe graphics or making the player character transparent. The solution was to make Little Mac much shorter than the boxers he was fighting: it enabled both characters to be visible on screen, and gave this title much of its distinctive, cartoon-like personality.

Despite a comparatively limited control mechanism, Punch-Out!! demonstrated a lot of variety in its gameplay. Like all good games, it was relatively simple to get to grips with the controls, but challenging to actually master it. It never made for particularly accurate boxing, but it did make for a wonderfully addictive and playable arcade-style videogame.

So popular was this title in the USA that Nintendo actually ported it back from there to Japan, where it had already been released as simply Punch-Out!! for the Famicom. The Mike Tyson edition sold incredibly well there as well, despite players by-and-large buying a re-branded version of a game they had already played.
Posted by Grant at 8:42 AM