Bodacious Space Pirates: "The Princess and the Pirate" 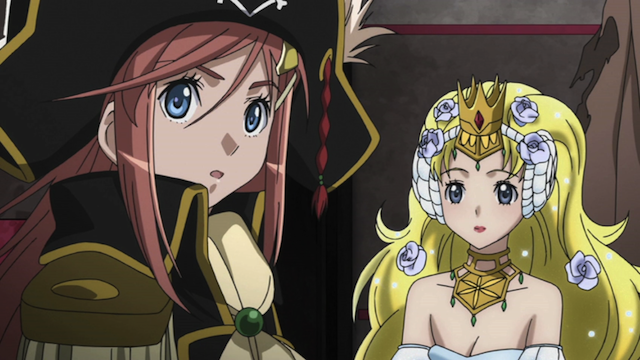 The identity of the Bentenmaru's stowaway is revealed: Princess Gruier Serenity, who is looking for Marika's father. Once that confusion is resolved, Gruier tasks Marika with locating a lost starship. When newscasts reveal that Gruier has been reported as missing by her government - despite the princess assuring everybody that her government knew where she was going, Marika places Gruier undercover at her own high school while she and the Bentenmaru crew work out what to do next.

Why is this series worth your time? For one thing, it's the sort of series that will name a character Gruier Serenity. Seriously: that's her actual name. Gruier Serenity. Is she a hippie princess or a French cheese? There's no need to decide: this is anime, which is allowed to be weird, so she gets to be both. Beyond that, this is a broadly entertaining episode that sets up a fresh storyline for the series: the hunt for a the golden ghost ship.

It's slightly odd that we've finally reached the sort of episode I was expecting from Bodacious Space Pirates - you know, the kind of episode where there are some space pirates, and they start to have some kind of humorous adventure - and it's taken us eight episodes to get there. Still now that we're here, it's all marvellously entertaining and silly.

Princess Gruier is an anime cliche who's strolled into the series fully formed, but whose presence allows for a lot of the episode's humour. The scenes where she's been secretly infiltrated into Marika's school - where everybody knows exactly who she is and form excited crowds around her - are great, as is the last-minute rush to drive the car to the spaceport on time.

This isn't world-shaking entertainment, but it is entertaining. Much of the episode seems to be set-up, so I'm hoping there's a bigger pay-off in the episodes to come. All in all, it gets my tick of approval, bringing the season quality up to 75%. I'm also not certain if I'm mentioned this before: I'm genuinely impressed with Marika's pirate outfit. It manages to be funny, cute, cool and not overly skeezy.
Posted by Grant at 9:55 AM