Star Trek: The Next Generation: "The Dauphin" 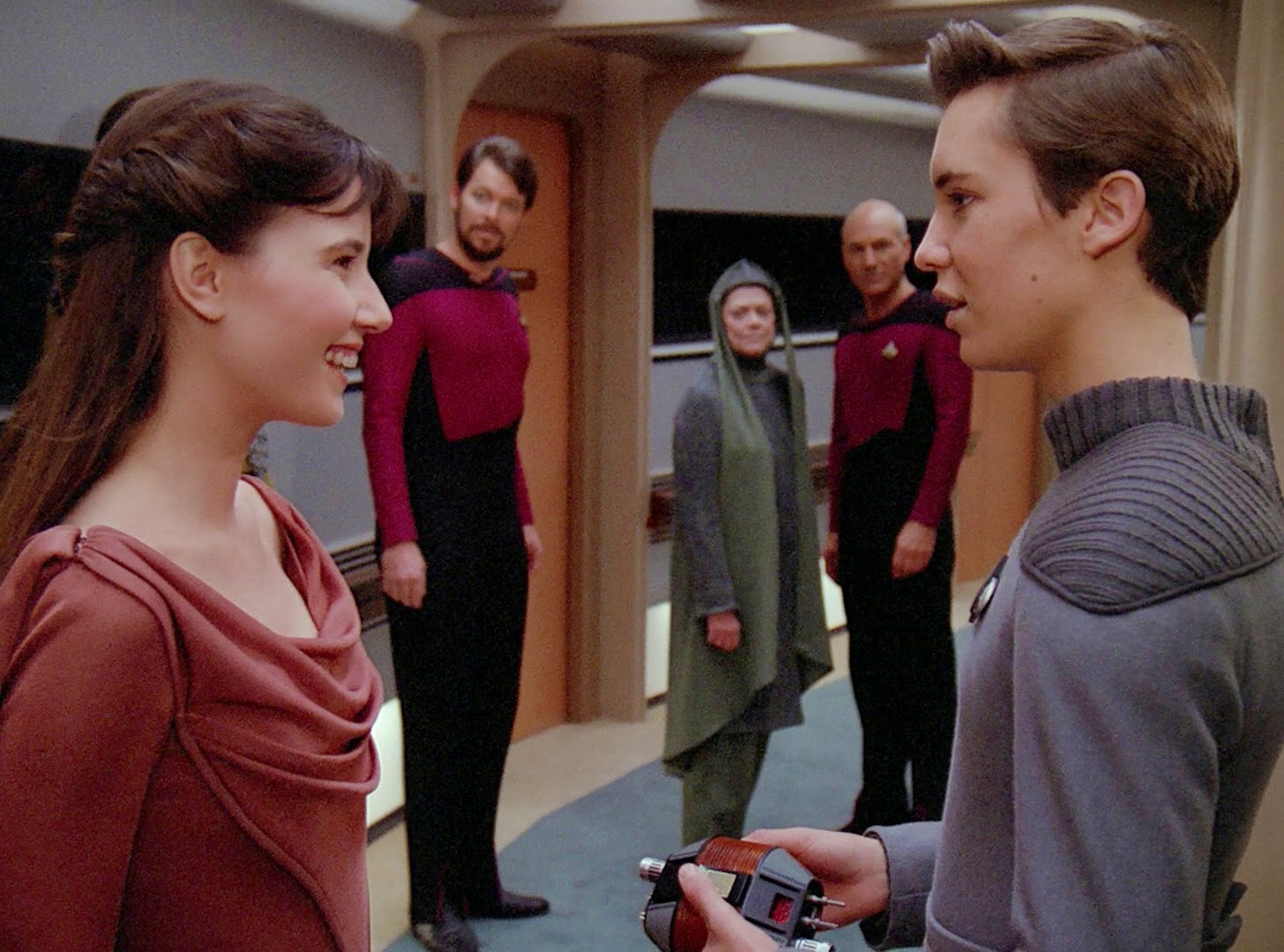 The Enterprise is assigned to transport Salia, the heir to the warring planet of Daled IV, to her homeworld in order to assume her throne. She is accompanied by her childhood governess Anya, who seems particularly protective of the young princess. When Wesley Crusher strikes up a romance with Salia, Anya reveals some unexpected and highly dangerous abilities.

Boy, talk about putting your episode behind an eight-ball. The very premise of "The Dauphin" - Wesley's first love - is enough to send an audience running out of the building, shrieking in terror at the potential loss of sanity. It's not Wil Wheaton wasn't capable of handling a romantic storyline - of course he was, he was an accomplished professional actor - it's that while Star Trek is good at a great many things romance is typically not one of them. Couple with that a regular inability to write Wesley as any kind of recognisable teenager and you've got a pretty firm recipe for disaster.

I previously noted that with "A Matter of Honor" two episodes ago Star Trek: The Next Generation turned a corner, and suddenly became a good TV series. It was evident in that episode, and really evident in "The Measure of a Man", but it's arguably just as obvious here. This is a bad episode, let's not pretend otherwise, but it's a bad episode littered with decent scenes and good characters. The scenes where Wesley gets romantic advice - first from Worf and subsequently from Riker and Guinan, are genuinely funny. (How do Klingons romance? The female screams and throws furniture, while the male reads out love poetry and ducks a lot.) Praise also needs to go to Wil Wheaton, who does a bang-up job with some terrible dialogue.

Technology gets in the episode's way - it features shapeshifters, but the episode pre-dates the sort of CGI 'morphing' that would have made such scenes a doddle within five years. The results are pretty shaky, as are the hilariously unfortunately furry monster suits into whom Anya and Salia transform. The unintentional comedy actually gives the episode an additional level of charm - not that it saves it. Twin Peaks fans might enjoy seeing Madchen Amick in a brief scene as "young" Anya.

So we're back with another poor episode, but crucially it's a much more watchable poor episode than earlier stinkers. Season 2 is now left with four good episodes out of ten, or 40%. Not great, but already better than Season 1. By the way, let us remember - since the writers of this episode did not - that the female form of dauphin is dauphine. Either this episode is incorrectly titled, or Salia was more of a shapeshifter than she led Wesley to believe. (For the record, the French broadcast of this episode was indeed titled "La Dauphine".)
Posted by Grant at 6:56 PM