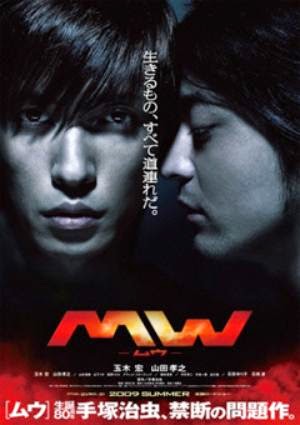 Osamu Tezuka is known around the world as the creator of Astroboy and Kimba the White Lion. His iconic, Disney-inspired artistry not only captured the imagination of generations of readers and viewers, he also single-handedly dictated the visual aesthetic for post-war manga and anime. Something international readers don’t often realise is the sheer depth and length of Tezuka’s manga work. In a career that lasted more than 40 years he wrote and drew more than 150,000 pages, spread across a wide variety of genres.

MW, which was until recently a relatively obscure work outside of Japan, is a surprisingly adult work that follows a guilt-ridden priest, his adoptive serial killer brother, and the ramifications of chemical weapons testing on an isolated Pacific Island.

In 2009 the manga was adapted into a live-action feature film, forming part of a broader celebration of what would have been Tezuka’s 80th birthday. Sadly the end result is a strangely messy film.

The individual components all look as if they would work extremely well, yet when shoved up against one another they result in a fairly frantic, disorganised whole that is quite difficult to follow. MW is a highly Hollywood-esque film. It takes its pace, musical score and tone from the hi-octane action-thrillers that have made American film immensely popular, but it takes them in a very superficial way. The film opens with a prolonged police-versus-kidnapper chase, which riffs off a variety of Hollywood films including John McTiernan’s The Thomas Crown Affair and William Friedkin’s The French Connection. Placed in the middle of a film, once the characters are known and more readily related to, and the sequence would be thrilling. As presented here, at the beginning of the film, it’s simply too long and involved to sustain the viewer’s interest.

Hiroshi Tamaki and Takayuki Yamada both play their roles with an overwrought sense of melodrama, as if often the case in these kinds of Japanese and Korean thrillers. Ultimately MW is a hollow exercise: high on visual and auditory flair, edited to within an inch of its life (and yet disturbingly still more than two hours long), all sound and fury but with no actual depth. Hard-core fans of Japanese melodramatic thrillers may find much to enjoy here, and Tezuka fans may wish to satisfy their curiosity, but overall MW is a clumsy missed opportunity.
Posted by Grant at 12:09 AM