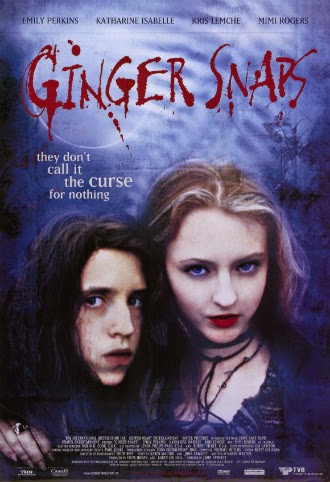 One of the things that fans of Joss Whedon's Buffy the Vampire Slayer point to as proof of that show's genius is how it took everyday adolescent concerns and dilemmas and presented them allegorically on screen. The idea that a teenage girl who loses her virginity to a boy, for example, only to discover he promptly rejects her and is suddenly rather cruel: Buffy played it out with the boyfriend's monstrous behaviour being the result of actually being a monster. If there's a downside to this approach, however, it's that none of the teenagers in Joss Whedon's series ever actually spoke like teenagers. There was a slightly over-educated sense of intelligence snark about it all. The character may have acted like teenagers, but they spoke like a television script writer.

Here, then, is a teenage allegory that takes that extra step: Ginger Snaps is a low-budget Canadian horror film from 2000. It does the same thing, in this case using lycanthropy as an intentionally dark and funny allegory for female puberty, only its characters act like real teenagers and speak like them as well. It was a big hit in Canada back when it was made, and has since gained something of a cult following internationally.

Ginger and Brigitte Fitzgerald are sisters in a small Canadian town. They're very close. They have a suicide pact. They take photo sets of each other posed in dead positions, covered in gore. When a late night prank results in Ginger being mauled by a large wolf-like animal their lives change radically. Ginger starts acting differently, drawing the attention of boys at school and becoming meaner and more violent. The younger and more withdrawn Brigitte is confused, but with the help of the school's local drug dealer works to find a way to cure her sister before it's too late.

This is a low budget movie, and certainly a lot of the effects towards the film's climax are incredibly cheap to look at. What makes this film work is the tight, well-considered screenplay and the strong lead performances. While Katharine Isabelle is great as Ginger it's actually Emily Perkins who impresses me more as Brigitte. She feels real, and she's a genuinely engaging protagonist. Special note should also be made of Mimi Rogers, who plays quite hard against type and Ginger and Brigitte's fussy, comedic mother.

I particularly like the bold fashion in which this movie dives into issues of female friendship, sexuality and menstruation by tying them into a horror movie about a teenager turning into a werewolf. It sounds ridiculous and probably shouldn't work, but somehow Karen Walton's screenplay makes it not only work but excel. It feels quite transgressive.

Ginger Snaps was a big enough hit in Canada to be followed by a sequel, Ginger Snaps Unleashed, as well as a curious prequel - Ginger Snaps Back - in which Isabelle and Perkins play 19th century versions of their original characters. All three are worth checking out, however as if often the case it's the original film that's the most interesting.
Posted by Grant at 9:45 AM