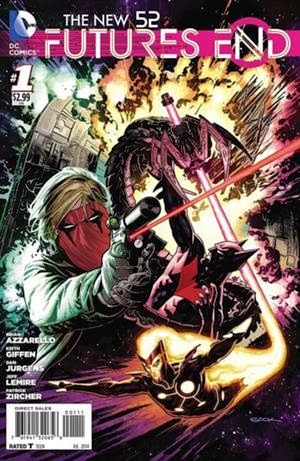 The second of DC's three simultaneous weekly titles debuted this week: The New 52: Futures End (note the lack of apostrophe, this is apparently significant) is a time travelling cyborg apocalypse from writers Brian Azzarello, Dan Jurgens, Jeff Lemire and Keith Giffen. The first issue's capable artwork is by Patrick Zircher. From the get-go there are some immediate observations.

Two: this all feels like a badly reheated meal that we all ate some time before. Brother Eye taking over is straight out of Infinite Crisis. Superheroes turning into mindless automata controlled by a superior power is straight out of Final Crisis. A hero travelling back in time to save the future is from pretty much everything. I didn't get any sense of any originality from this issue, which given the presence of Azzarello and Lemire genuinely surprised me.

Three: this appears to be the comic where all the characters nobody loves come to die. The entire cast of Stormwatch crop up within the first few pages. Grifter gets a lengthy sequence reminding the reader of who he is and of his alien-hunting schtick (and the cover - way to sell your weekly epic DC, with a character everybody by demonstration didn't care about). Mister Terrific gets name-checked and, I presume, will be returning shortly. I assume as the next few weeks unfold we'll also be seeing OMAC, Vibe, Katana and the Green Team.

A weekly comic book is a big commitment for a reader, but when it works - as it did in spades with 52 - it's worth it. When the results are more like Countdown to Infinite Crisis or Trinity, it's an absolute chore to support. I certainly won't be buying issue #2. (1/5)

Under the cut: reviews of Aquaman and the Others, Batwing, Black Widow, Detective Comics, Justice League 3000, Miles Morales: The Ultimate Spider-Man, Revival, She-Hulk, The Wake and The Woods. Additionally, there are late reviews for Batman Eternal #4 and Justice League 3000 #5.

Let's quickly catch up with two books I didn't get to when they first came out. I really enjoyed the first three issues of Batman Eternal, but I have to admit this fourth issue feels a bit like treading water. Jim Gordon gets refused bail and sent to Blackgate, and Batgirl isn't handling that very well. Batman has a threatening meeting with Carmine Falcone. Hopefully this is just a one issue slip and not a sign that the book is already losing momentum, otherwise this is going to be a long year. (2/5)

This was last month's issue, that I somehow failed to buy until I noticed that this months issue had come out. Firestorm joins the team, and while I'm not the greatest fan of the character generally I do like this amoral, self-interested, slightly bored version. He makes for a useful addition to the team now that Superman, Wonder Woman and Batman are deliberately being softened and rounded off. Guest artists Raymond Bermudez and Wayne Faucher do a bang-up job, slipping in seamlessly with a style that fits nicely with what Howard Porter has been doing. (3/5)

Aquaman and the Others #2

This is a solid and entertaining team book with some intriguing characters and a strong sense of pace. Medina and Tadeo's artwork is particularly good: it's not flashy, but it's grounded with a touch of realism while still looking like a superhero book. I'm still not one hundred per cent on whether or not it's likely to maintain interest going forward, but I applaud DC's attempt at pushing new characters for a change (Aquaman not included). The question remains over how long this book will last. In the old days I suspect this would have made for a reasonable miniseries - I'm still not sure there's enough here to justify an ongoing monthly. (3/5)

This issue felt like padding: by the end I didn't feel as if I was any further through the story than I was last month. Luke Fox continues to fight his way through Gotham's literal underground, while his father struggles to keep himself composed and his sister makes a break for freedom. The bulk of the issue is taken up with the Batwing versus Tavaroff punch-up, and that kind of scene gets boring pretty quickly if there isn't something exceptional going on. There's nothing exceptional going on in Batwing. There hasn't been in a year now. (1/5)

There's always been a problem with Black Widow's solo titles. No matter how strong her connection to SHIELD and the Avengers, her solo books inevitably fall back on her past as an assassin and rapidly get particularly grim and humourless. I've really enjoyed this new monthly precisely because it's by-and-large been avoiding her past in favour of some SHIELD-supported espionage action. Phil Noto's artwork has been a big selling point as well: his painterly, subtle style has really enhanced Nathan Edmondson's writing. It's great to see such a good character receive such a well thought-out, high quality comic. (4/5)

This is pretty much the nicest-looking Batman comic on the market. Manapul's artwork is jumping off the page. With his first issue last month I commented how well Manapul had adapted his innovative art style from The Flash to Detective Comics. This month I think his Detective work is surpassing what he did on The Flash. He and Brian Buccelatto are telling a good story as well, with a new drug on the market leading Harvey Bullock to Bruce Wayne's manor. I like Harvey, and he's being presented particularly well here. (4/5)

Howard Porter really is doing the best work on this comic. I love the look, the intricate backgrounds, the subtle re-designs of all the Justice League costumes. This issue there's more than a little Moebius in the design work, which of course is right up my alley. The storyline continues to impress me as well, with the events of the first five issues all pulling together and pointing towards some great stuff to come. This has rapidly become one of my favourite comics in the DCU. (4/5)

When is a relaunch not a relaunch? When it's like this: heaven help anybody taking the opportunity to try out Ultimate Spider-Man with this new issue one. It's heavily loaded with continuity references, assumed backstory and already well-established characters. I read the entire second volume of this book, which started with the origin of Miles Morales, and even I struggled to follow this issue completely since it's immersed in stuff that happened before Peter Parker died. In terms of the basic nuts and bolts of writing and art it's perfectly enjoyable, but it does feel more than a little cynical of Marvel to claim this is issue #1 when it's clearly issue #201. (3/5)

With signs that a reviver may have somewhow breached the quarantine zone, Dana finds herself on a plane to New York. Meanwhile her sister begins to learn how to relax and accept what has happened to her. I like pretty much every issue of Revival, but this issue felt particularly well scripted by Tim Seeley. The story is suddenly progressing in an interesting direction, several characters manage to make big steps forward, and the momentum of existing plot threads are kept ticking along in a satisfying fashion. It's simplifying things terribly to claim this is a great horror comic, because it's simply telling a fantastic story in general. This is the best comic of the week. (5/5)

I really enjoyed the first three issues of She-Hulk, but this fourth issue doesn't come together half as well. It spends a lot of time with a conversation between Jennifer and Matt "Daredevil" Murdock, which led me to think this was going to be a fairly long storyline. Instead it's all wrapped up in the space of a couple of pages, making me feel a little short-changed. There was a bigger and better storyline here, and I'm a little disappointed Charles Soule didn't find it. Kevin Wada's cover artwork remains outstanding, however; I kind of hope they get him to illustrate a full issue at some point. (3/5)

I have been loving The Wake to bits since it started, but this issue left me cold for some reason. It didn't seem as immediately engaging, and for the first time I found it slightly confusing. Part of the problem may be the two-month delay between issues #7 and #8. Sean Murphy's artwork remains strong and vibrant, but Scott Snyder's writing just seemed a little too murky to me. There's one scene in the middle that seemed actively incomprehensible. There are two issues left to go on this miniseries, and I'm really hoping that Snyder and Murphy can pull it together and deliver the climax that we deserve. After all, I gave five of the preceding seven issues five stars - it would be a shame to stuff it up after all of that. (2/5)

Boom Studios are slowly redeveloping themselves, from a sort of low-level superhero publisher to more of an Image Comics in-the-making. I recently tried out their fairly avant-garde superhero miniseries Translucid, and this week I tried out The Woods - a new science fiction series by James Tynion IV. An American high school of almost 500 staff and students is inexplicably transported to an alien forest. While the bulk of the abductees freak out in the school's corridors, a small band of students get together and elect to explore the forest on their own. This is a good first issue, but I have to say it's a damned fast one: there's barely enough time to get to know the leads before the shit hits the fan and everybody's running for their lives from carnivorous monsters. A few extra pages to flesh out the cast would have improved things immeasurably. Michael Dialynas provides some cartoony but appealing artwork, and it's all intriguing enough to draw me back next month to find out what happens. (4/5)