Star Trek: The Next Generation: "Contagion" 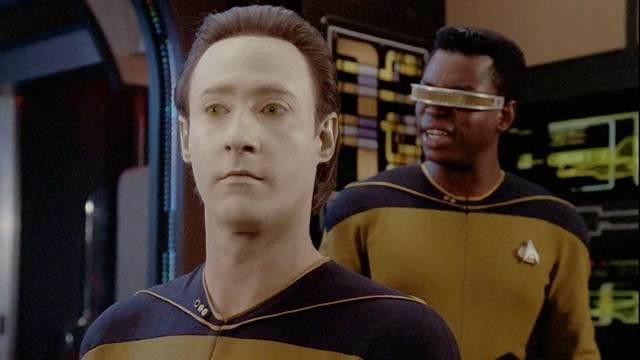 The Enterprise breaches the Neutral Zone that divides the United Federation of Planets from the Romulan Empire in order to rescue its sister ship, the Yamato. Since its crew investigated an ancient civilization known as the Iconians, the Yamato has started to suffer catastrophic malfunctions - malfunctions that result in the ship's self-destruction. Now the Enterprise and a Romulan vessel are both struggling to work out the source of the computer malfunctions before their own ships suffer the same fate.

I did a double take during the opening credits to "Contagion", when one of the writers listed was Steve Gerber. I looked it up and can confirm that it is the same Steve Gerber who created the cult comic book Howard the Duck. It seems an odd thing for Gerber to be writing, but he - and his co-writers - do a great job. We got a brief look at the Romulans in "The Neutral Zone", but this is their first fully-fledged appearance in The Next Generation.

This is a clever, straight-forward science fiction story. It has a mystery that sets the plot in motion, it raises the stakes pretty well as it goes, and it's got a neat alien civilization in the background. The technology of this ridiculously advanced culture might not look as advanced as it probably should, but that's more a production design issue than anything to do with the script.

Patrick Stewart and Jonathan Frakes swap places, with Picard leading the away team and Riker taking command of the Enterprise. This gives both characters a refreshing change of scene and action. The episode's main guest star is Carolyn Seymour as Romulan Commander Taris. Genre fans might recognise her as Abby Grant from BBC post-apocalyptic drama Survivors. Seymour will return to The Next Generation in Season 6 as an identical but differently named Romulan - I have no idea why they didn't just bring Taris back.

Trivia fans might note that this episode features the first time Picard asks a replicator for 'tea, earl grey, hot'. It gives him a potted plant.

This episode feels like the benchmark for future Next Generation episodes. It has a neat idea at its core, the characters act in likeable ways, there's a little bit of action and suspense, and it all wraps up neatly by the episode's end. I enjoyed it, and that brings the number of good episodes this season up to five out of 11. That's a quality ratio of 45%.
Posted by Grant at 8:52 AM