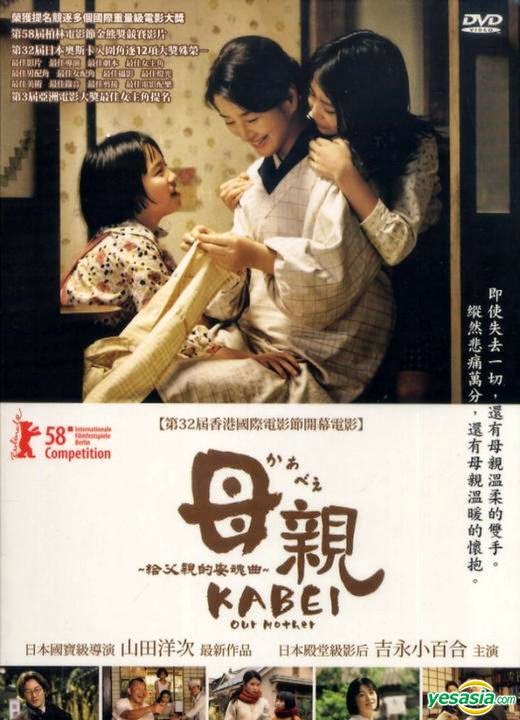 What could easily have been a maudlin and tedious melodrama becomes a sensitive, heartfelt and engaging drama at the hands of writer/director Yoji Yamada. Kabei: Our Mother is a film adaptation of the Teruyo Nogami book Chichi eno requiem, presenting a fascinating glimpse into early 1940s Japan – a time when the nation was engaged in a brutal military occupation of China, and making overtures towards war with the USA and all of mainland Asia.

It makes for very interesting viewing. In an English-speaking culture we’re used to stories of World War II from the point of view of Australia, the USA or Great Britain. We occasionally get to see films from a German point of view. It seems very rare to see them from a Japanese one – particular, as is the case here, from a domestic perspective. The war is going on off-screen, and we are instead immersed in a world of rationed food, military service drafts and rigorous pro-war propaganda.

Sayuri Yoshinaga plays Kayo Nogami (nicknamed Kabei – everyone in the family uses nicknames), a loyal wife and mother whose scholar husband Tobei (Mitsugoro Bando) is arrested in the middle of the night under the Peace Preservation Laws because the authorities believe he has communist sympathies (for example, he describes Japan’s brutal invasion of China as a war and not a “crusade”). As Tobei’s incarceration stretches from weeks to months, still without charges or a conviction, Kabei continues to press for his release while caring for their two daughters, Hatsuko and Teruyo (who would ultimately write the biography that forms the basis for this film).

At the centre of the film is Sayuri Yoshinaga’s outstanding performance as Kabei. It is a wonderfully rounded piece of acting, expressing complex and realistic emotions through a tightly controlled veneer of stoic politeness. Given the trials that Kabei faces throughout the film, it would be so easy for Yoshinaga to wallow in the negative emotions – sadness, frustration, grief – and it is key to the film’s success that she and Yamada manage to bring so many lighter emotions into play.

The rest of the cast are impressive, with the possible exception of Tadanobu Asano as Yamazaki, a young student of Kabei’s husband who begins to help around the house while the professor is in prison. Asano offers a slightly mannered, off-putting performance that jibes a little with the very realistic tone of the rest of the film. The production design is excellent, immersing the audience in a small working class suburb of 1940. It adds immeasurably to the realism of the piece.

Director Yoji Yamada is a veteran of Japanese cinema, working as a writer and director since 1960 (including numerous instalments of the perennial Tora-San franchise). He has gathered acclaim in recent years for his excellent samurai dramas, including The Twilight Samurai and Love and Honor. On first inspection, Kabei would seem to be a different kind of film. In truth, the strong themes of honour, loyalty and firm composure remain intact. It’s easy to overlook Yamada: his films are not visually extravagant, and often (as is the case here) elements such as the musical score are sparingly used. To overlook him, however, would be to ignore his exceptional sense of character and story. Kabei is a story of real people with genuine emotions. There is a depth here that is hard to find in your local multiplex cinema.

A focus on story and character rather than photography or mise-en-scene has always struck me as a particularly Japanese style of cinema. It’s visible in the films of Kenji Mizoguchi as well as the legendary Akira Kurosawa. Kabei boasts some Kurosawa heritage of its own: Teruyo Nogami, whose book forms the basis for the film, was a script supervisor for Kurosawa, starting with Ikiru in 1952 and working on Seven Samurai, Throne of Blood, Yojimbo and others. Warm, gentle, restrained and tragic, Kabei: Our Mother is a wonderful achievement, and marks another understated classic from a filmmaking master.
Posted by Grant at 9:04 AM