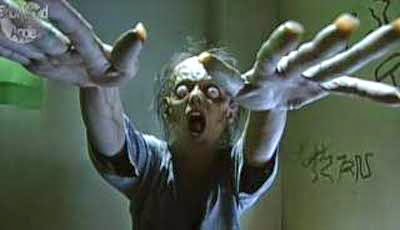 A young man is admitted into psychiatric care. He claims he's having long dreams. He goes to sleep, and in the space of a few hours experiences six months in his dream world. Soon he's dreaming for a year, then ten years. How far will his 'long dreams' go, and what will happen to him in the meantime?

I am a huge fan of Uzumaki, a weird Japanese horror movie directed by Higuchinsky and based on the manga by Junji Ito. I was excited a few weeks back to learn that in the same year that they collaborated on that movie they also made this 60-minute made-for-television film. It's a much, much cheaper production, shot on videotape with little in the way of mise-en-scene or production values. Like Uzumaki it faithfully adapts one of Ito's horror manga. It's scrappy as hell, with cheap make-up effects and slightly dodgy performances. It's also brilliant. Let me explain why. 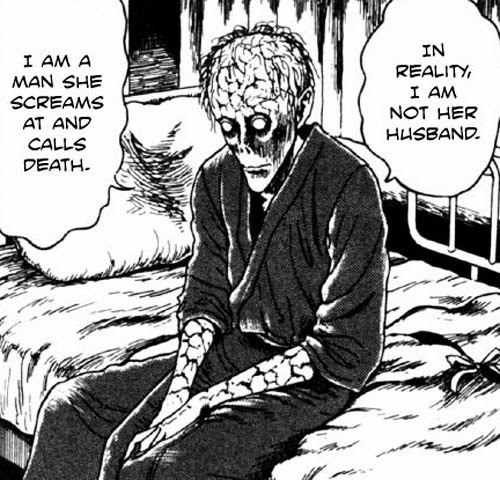 There are basically two things that impressed me. The first is how effectively Higuchinksy (a pseudonymous Ukrainian/Japanese director who is notoriously reclusive) translates Ito's visual imagery to live action. The prosthetic make-up used to demonstrate Mukoda's horrific evolution as his dreams extend further and further is superficially rather silly - until you realise just how accurately it translates Ito's style to live-action. It's silly, but at the same time it gets under your skin a little. It becomes disturbing the longer you watch it. Compare the still from the film above with the panel from the manga to the right. Higuchinsky nails the aesthetic, and with significantly less money than he had available to adapt Uzumaki.

The second thing that stuck with me after watching this film was just how horrific the central concept is. Falling asleep, living a week in a nightmare, and then waking up the next morning is a brutal enough concept to give me a shiver. But a year in a nightmare, only to wake up and discover that none of it was real or mattered? What about ten years? Or five hundred? At the core of Long Dream is a concept so horrible that it overcomes all budget shortcomings and really lingers in the mind.

As I mentioned earlier, the performances by the film's cast are generally not impressive. The film overcomes them. This is an obscure little diversion for Japanese screen horror, but once seen you're unlikely to forget it.
Posted by Grant at 9:14 AM