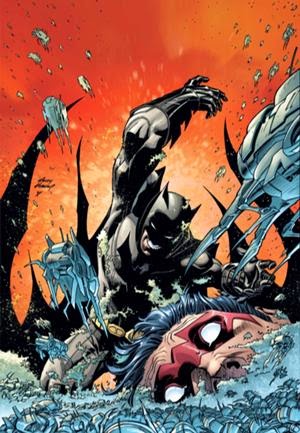 Six issues in, and I'm developing a pretty good sense of what Batman Eternal is all about, and I like what I see. It's ostensibly about a big story arc that's slowly being revealed involving a gang war, nanotechnology and some mysterious background villain working behind the scenes. What it's actually about is being a sort of anthology book in disguise. Let me explain.

Batman has one of the largest supporting casts in comics, particularly for an apparently solo hero. He has a broad range of villains, a large number of sidekicks and associates, and no small quantity of police officers and politicians. Batman Eternal is mixing them all together, and giving each character an issue or two to shine and stand out. The first issue was very much about Jim Gordon. Issue #4 (which I reviewed last week) was based around Batgirl. I'm now caught up with the series, having read issues #5 and #6 last night - #5 is a Red Robin/Harper Row team-up, and #6 matches Batwing with the Spectre. 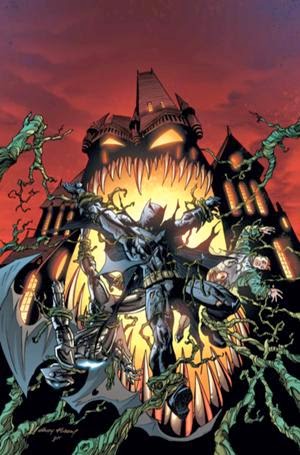 I love it. One of the things I felt has been missing from the New 52 has been that sense of interconnectivity. Sure there have been crossovers and the odd events, but it all feels so weirdly disconnected from one another. Batman Eternal is making me feel like Gotham is a big connected series of superhero adventures, and that's something I really like. Of the two issues, I vastly preferred #5's Red Robin adventure: Tim Drake is a brilliant, criminally underused character, and he's a great match with Harper. I wouldn't be surprised or disappointed to see them get a team-up book within the next 12 months. Certainly it's something I'd buy in a shot: Red Robin and Bluebird sounds like a hit in the making to me.

Once again one of my regular comics has been drawn into a multi-title crossover, and I'm not particularly willing to play that game. As a result I haven't read the US$4.99 one-shot Superman: Doomed, that leads into this issue, and I haven't read Superman Wonder Woman which follows up on what happens next. In this issue, Superman is suffering from having breathed in a black substance left when Doomsday exploded (your guess is as good as mine), and this seems to be transforming him into Doomsday. It's well written, well drawn and generally enjoyable, but I can't say it's inspired me to rush out and spend an extra eight dollars this week alone in an attempt to find out what's going on. It also spoiled the ending of Forever Evil to an extent, which was nice of DC to do - it doesn't end until next week. (3/5)

For a lot of long-term Gail Simone fans I can probably just type 'Batgirl versus Ragdoll' and leave it at that. Ragdoll was a fan favourite back when Simone was writing the brilliant villain-centric Secret Six, a title that was replaced in the New 52 by a fairly skeezy and unpleasant relaunch of Suicide Squad. This is a fun, although quite dark issue that follows up on last week's Batgirl annual, provides a solid New 52 debut for Ragdoll and continues some of the continuing plot threads at the same time. Now Barbara's sort-of boyfriend is suing her father. Can Babs never have a happy time? It's like Party of Five in here. (3/5)

I'm slowly developing a problem with FBP. I love the concept, I like the characters and I really like Robbi Rodriguez's distinctive flowing artwork. At the same time I can't deny that my engagement with the book is slipping. I'm not sure what it is: it may be that Simon Oliver's scripts aren't structured quite well enough. Cliffhangers don't quite get me as excited as they should, and each issue's opening is soft enough that I struggle slightly to remember what was going on. This may be a case of a comic that reads much better in trade paperbacks: certainly the first volume is out at only US$9.99, so it would easy for you to find out and let me know. (3/5)

I said last month that Lumberjanes showed promise, and to a large degree that promise is fulfilled with this funnier, pacier, all-round better second issue. The girls go white-water rafting, with typically unexpected monster-centric results. Brooke Allen's artwork is brilliant: cartoony, bright and appealing. Maarta Laiho's vibrant colours make it pop off the page as well. I'm usually rather lax in commenting on colourists, but it's so key to why this book looks so attractive that I'd be remiss in not mentioning it. If you're looking for a funny all-ages comic book, Lumberjanes is one of the best picks you could currently make. (4/5)

Luke smells a rat - and hears Ben Kenobi for the first time since the Battle of Yavin. Princess Leia's wedding begins. The Empire arrives. This is a very tight, well-paced penultimate issue that's short of surprises - it was kind of given Leia's wedding would go south - but high on Star Wars action. As always Wood nails the tone of the original Star Wars films. I haven't enjoyed this arc quite as much as the first two, but it's all pulling together rather marvellously. (4/5)

Now that the Batman Superman crossover demonstrated there was a way back to Earth 2, Power Girl is running 100 per cent on plans to recreate the portal and finally get home. She reveals her secret identity to her Karen Starr employees and her first experiment manages to cause a massive multi-city blackout. I'm still feeling that this book has lost its way. It felt very strong to begin with, but for the past 10 issues or so has been all over the place. I think part of the problem is that there's been too great a focus on their trying to return home and not enough on Power Girl and Huntress actually fighting crime. It's Huntress who seems to be losing out - she almost needs her own solo title again. (2/5)