Star Trek: The Next Generation: "The Royale" 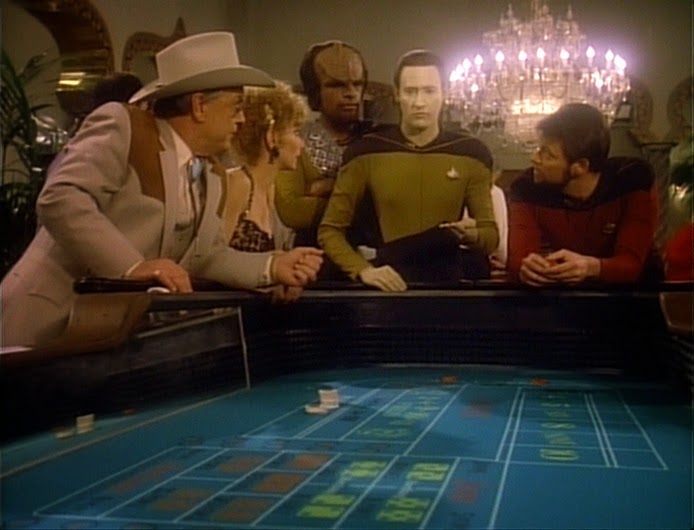 The Enterprise investigates reports of wreckage from an Earth-based starship orbiting an uninhabited world. They find remains of a 21st century NASA starship, inexplicably beyond where such a vessel could ever have reached on its own. On the surface Riker's away team finds a simulated 20th century casino, filled with pulp characters and cliche-ridden storylines - and once inside, they are unable to escape.

The first thing I want to raise in relation to "The Royale" is how ludicrous it is that so many 21st century space missions launched by the human race wind up dislocated to the other side of the galaxy in the 23rd or 24th centuries. We're only 12 episodes or so past "The Neutral Zone", where the Enterprise crew discovered a similar dislocated vessel. Similar stories crop up in the original series, The Motion Picture, Enterprise and Voyager. As far as I can make out, pretty much every early attempt by humans to explore beyond their own solar system ended in catastrophic failure and mysterious disappearances. It's a wonder they ever launched Jonathan Archer's Enterprise in the first place.

"The Royale" is a fairly wacky, "out there" kind of episode. We're never really given the details of what precisely has occurred: aliens found a single human survivor, and gave him a virtual world to live in based on a cheap pulp paperback they found among the spaceship wreckage. We don't ever meet the aliens, who appear to be long gone. We don't meet the human survivor either, unless you count discovering his dessicated corpse as meeting him. Nor is an explanation given for why the simulated casino traps Riker, Worf and Data inside, or why they have to undertake what they do in order to escape.

It is all rather fun, though. It's a light, engaging piece of fluff with some science fiction sneaking in around the edges. It's a holodeck episode, just like "The Big Goodbye" and "Elementary, Dear Data" - only by setting it on a planet with alien technology it avoids the "holodeck has malfunctioned" plot device that increasingly dogs the franchise as it goes forward.