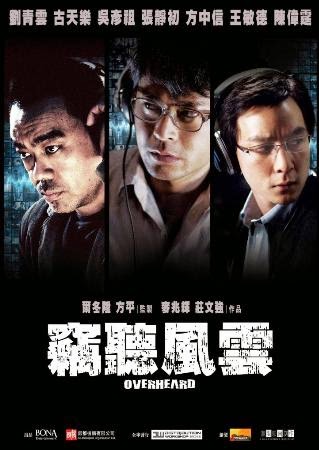 That’s Overheard in a nutshell. It's a 2009 police thriller written and directed by Hong Kong's super-team Felix Chong and Alan Mak. They scored a phenomenal hit some years ago writing Infernal Affairs for director Andrew Lau, and that film was remade in the USA as Martin Scorsese's Oscar-winning The Departed. Other Chong/Mak films have included Confession of Pain, The Lost Bladesman and The Silent War. They made great films, and I think Overheard is one of their best.

Overheard thrills, surprises and entertains in equal measure. The story focuses on a police surveillance unit who are monitoring a suspected insider trading scam. When two members of the team – one financially crippled by gambling debts and the other critically ill – decide to use the information they’ve learned to undertake some secret insider trading of their own, first careers and ultimately lives are put dangerously at risk. They try to put things right, but manage to make the situation a little worse. They try again, and it gets worse again. The tension is incrementally ratcheted up as the film goes on.

Through their scripts for a number of police-based thrillers, Chong and Mak have honed their skills to a razor-sharp edge. I’m not sure there’s a better pair of writers in the world currently working in this genre. Louis Koo and Daniel Wu are both excellent as the two desperate cops forced to face their errors in judgement, but it is Lau Ching-Wan who is the film’s standout as the weary Inspector Johnny Leung. Lau is one of Hong Kong’s best dramatic actors, having appeared in such films as Lost in Time, Mad Detective and The Victim. It is always a pleasure to watch his performances.

The Hong Kong film industry has always been the home of some of the world’s finest and most intriguing police-based thrillers. Overheard is without question another excellent film to add to that list. It's also the start of one of the unusual movie franchises: in 2011 Chong and Mak returned with their three leading men to make Overheard 2, a film with the same subject matter - crime and stock markets - but with the three actors playing completely unrelated characters. They're doing it again right now with Overheard 3, which opens in Hong Kong and Australia next week. Same subject matter, different characters. It's a strange way to build a franchise, but it's working brilliantly for them.
Posted by Grant at 11:09 AM