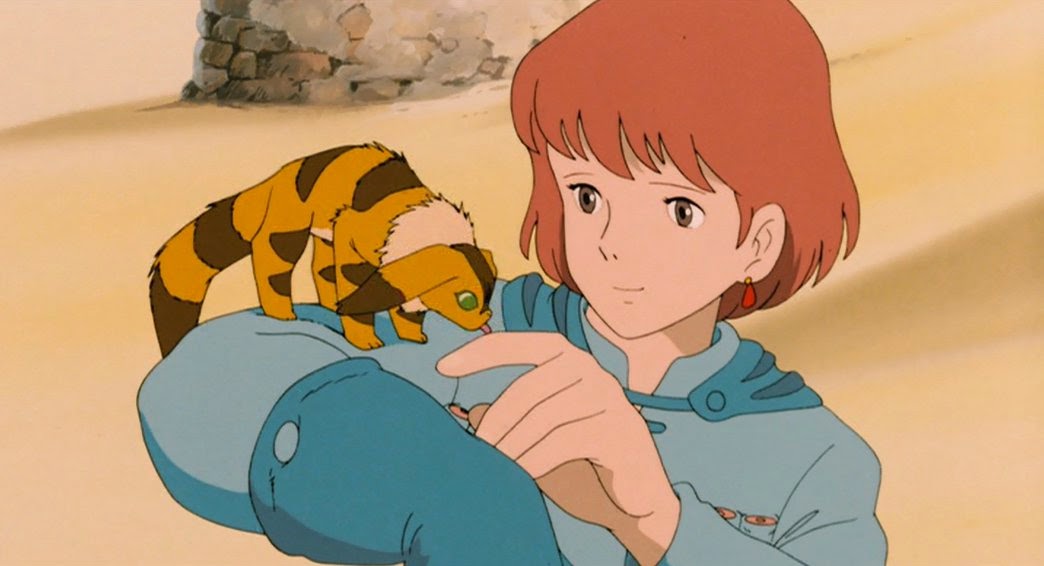 Today Studio Ghibli and its co-founder Hayao Miyazaki are both synonymous with quality animated film. Miyazaki is regularly hailed as the greatest director of animation of all time, a claim that is surprisingly difficult to dispute. His films effortlessly blend character, tone, aesthetic and imagination, creating movie experiences that are unparalleled in world cinema. He is also unusually effective and creating and animating female protagonists, which is far too rare in the motion pictures of any country.

Nausicaä of the Valley of the Wind, which was released in Japan in 1984, is his first original feature and a forerunner to Studio Ghibli, the animation company that Miyazaki set up with fellow director and producer Isao Takahata. It is visibly an early work: elements that would later feel standard for Ghibli films are only just being formed, and the visual aesthetic has not fully settled down to the signature Miyazaki “look” audiences will later grow to adore. The film is also a far more mature and adult work than his later family friendly films such as Kiki’s Delivery Service, My Neighbor Totoro and Spirited Away.

A thousand years after an apocalyptic war devastated the Earth, the planet is dominated by an enormous poisonous jungle that is populated by giant insects and which is lethal to human life. In the nearby Valley of the Wind, a small kingdom lives out a peaceful existence – ever-watchful for the dangerous spores that may float from the jungle and infect their own forests and meadows. When an aircraft from the warlike Kingdom of Tolmekia crash-lands nearby, it results in a military invasion by Tolmekian forces – and leads the young Princess Nausicaä on a quest to finally learn the secrets of the poisonous jungle.

Nausicaä of the Valley of the Wind is a film visibly influenced by French writer/artist Jean “Mœbius” Giraud. It borrows his visual style, his colour palette and even his locations. Like Nausicaä, Giraud’s work regularly centres on vast, flat deserts punctuated with jungles, towns and enormous skeletons. It all makes for a very effective combination. As with all of Miyazaki’s films, the characters are well construction and demonstrate an unprecedented amount of depth for animation. In Miyazaki’s world actions have consequences, tragedy affects people, and complex emotional arcs shine through. An early scene has Nausicaä killing several Tolmekian soldiers who have attacked her ailing father – many animated films, particularly anime, could contain such a scene. Very few would include a second scene, a few minutes later, where Nausicaä breaks down and sobs at the murders she has committed.

Nausicaä of the Valley of the Wind is now available on Blu-ray, and the high definition transfer of the film is first-class. It has become a cliché to claim that ‘films have never looked better’ than on this HD format, but in the case of Nausicaä it is absolutely true. The presentation of the film is so crisply realised that it’s possible to see individual pen strokes in the animation. The sound quality is also exemplary. For anime fans, there isn’t a better or more desirable way to see this movie.

The Blu-ray (and, of course, the DVD) also includes a Disney-produced English language dub. Many anime fans dislike English dubbing, which is understandable, but in the case of Studio Ghibli the dubs are universally excellent. Firstly, they employ A-level Hollywood talent (in the case of Nausicaä, the cast includes Patrick Stewart, Shia Le Beouf and Edward James Olmos) and voice directors. Secondly, they allow Miyazaki’s films to be seen by the audience who will appreciate them the most: children. Nausicaä is a more mature, challenging film for children than most other Ghibli features, but for the mature ten year-old it will be riveting.
Posted by Grant at 4:58 PM