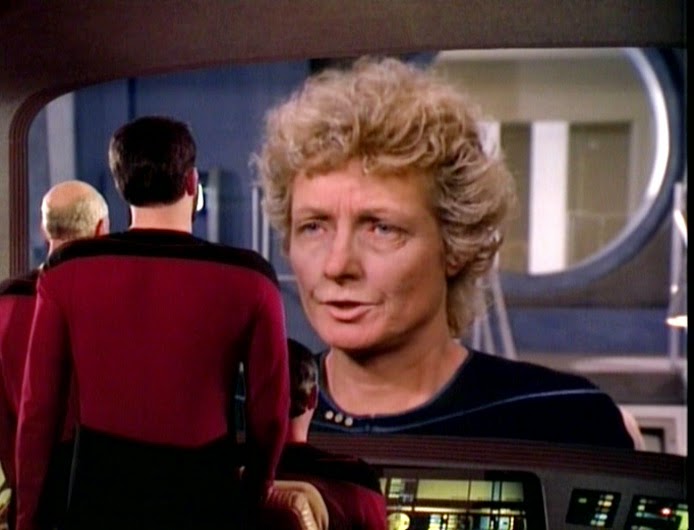 It's funny how time changes your opinions. Back in the late 1980s I was a big fan of Dr Katherine Pulaski (Diana Muldaur). I had not warmed to her predecessor, Dr Beverly Crusher (Gates McFadden), and she seemed to bring with her a nice sort of cranky wrinkle to Star Trek: The Next Generation. She brought a bit of spikiness to the generally anodyne personalities of the Enterprise command crew.

What a difference 25 years makes. The character that impressed me as a child irritates me as a man in his late 30s. I find her actively unlikeable, and am counting the episodes until she leaves and Dr Crusher returns. Since "Unnatural Selection" is based largely around Pulaski, it's not surprising that I didn't find it a particularly enjoyable episode.

The episode begins with Picard asking Counselor Troi for her opinions on Pulaski's performance. Troi gives a fairly positive response, which is more than I'd have given her. 'She's an anti-android bigot with no respect for your second officer' would have been my response.

At any rate the Enterprise is soon called to assist a starship, and then a genetic research station, both of which have been afflicted by a mysterious virus that ages its victims to death within the space of a few days - if not hours. The virus seems to be related to the genetically engineering human children on the station, and before long Pulaski herself has been infected and must race to find a cure before-

Whoa, wait. Backtrack. Genetically engineered human children? That's right. In complete ignorance of Star Trek history and lore, this episode features a Federation-sanctioned scientific program to genetically engineer humans in a lab. Way back in the original Star Trek, this sort of experimentation is what gave the galaxy Khan Noonien Singh. Jump forward to Deep Space Nine, and Dr Bashir's career gets jeopardised when it's revealed that he's the subject of an illegal experiment himself. Wedged in between in this weird, thoroughly unethical series of experiments where they're creating humans in a lab. It's weird, and just the idea alone - expressed here in a matter of fact manner - makes a lot of the episode difficult to swallow.

It also feels a little too familiar to "The Deadly Years", an episode of Star Trek with a similar ageing disease. It's like we're back in Season 1 territory, with The Next Generation nervously copying its predecessor out of a fear of trying anything new.

It's not good. It drags down the season's running score as well: two good episodes out of seven gives us a total of 29%. On the plus side we get a little bit of clarification on Chief O'Brien's role onboard: he's now officially transporter chief, a role he'll continue to play until he leaves for Deep Space Nine.
Posted by Grant at 9:02 AM