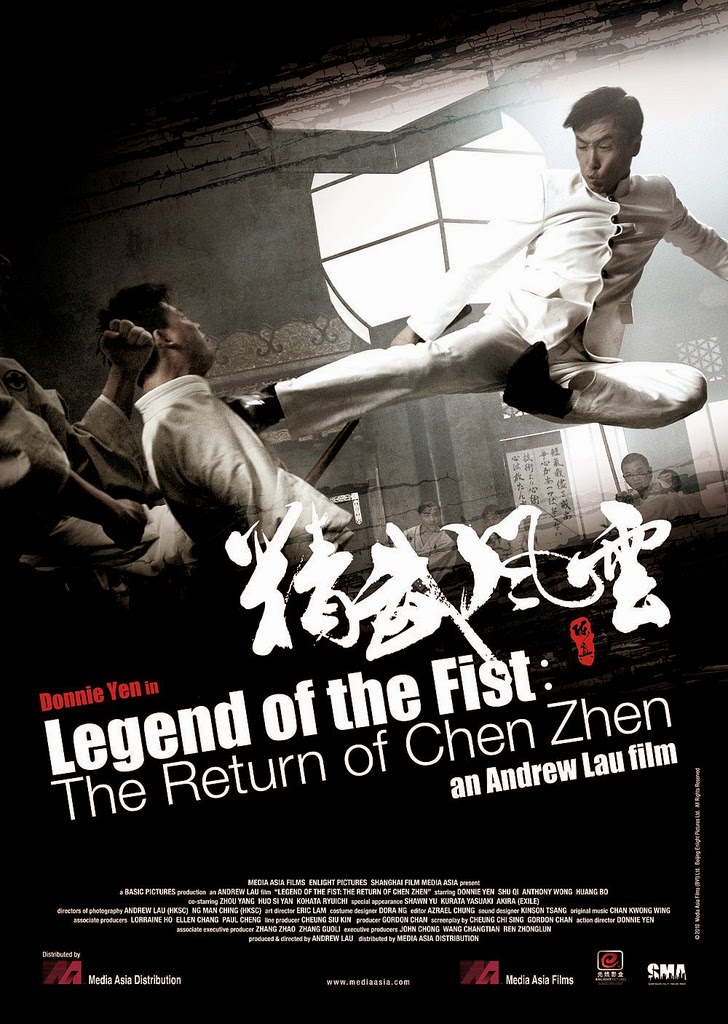 In the 1972 film Fist of Fury Bruce Lee introduced the world to Chen Zhen, a skilled martial artist from Shanghai who avenges his master’s death against a villainous Japanese dojo master. While Lee died the following year, the character of Chen Zhen has remained a popular one, inspiring numerous films (including 1995’s Fist of Legend, starring Jet Li) and television dramas. The fictional adventures of Chen Zhen continued in 2010 with the release of Legend of the Fist: The Return of Chen Zhen, a new martial arts adventure directed by Andrew Lau and starring Donnie Yen.

After serving with his fellow Chinese labourers on the battlefields of World War I, legendary martial artist Chen Zhen assumes the identity of a fallen comrade and returns to China. There he launches a secret offensive against the Japanese army in occupied Shanghai, and comes face-to-face with the son of the Japanese man he killed several years ago.

Legend of the Fist is actually a sequel to a 1995 television series, which greatly expanded on the original Fist of Fury and ran for 30 episodes. Donnie Yen played the role of Chen in that series, and he repeats it here. While the film starts in World War I France, it rapidly moves to 1925 Shanghai, where the Japanese have occupied the city and are going about preparations for a full-scale invasion of China. Chen Zhen, under his assumed guise of Qi Tianyuan, quickly becomes co-owner of a popular nightclub while simultaneously putting on a black suit and mask to fight the Japanese and defend Chinese rebels on the streets of Shanghai.

What we essentially have here is a Hong Kong superhero movie. It is effectively a Hong Kong version of Batman: a brooding masked hero with exceptional acrobatic and martial arts skills running around the streets and rooftops of 1920s Shanghai. The slightly noir-esque aesthetic and setting also brings to mind characters such as the Shadow. If nothing else this gives the film a highly distinct style. By blending Hong Kong kung fu flicks with American superhero adventures, Andrew Lau has managed to create a new and intriguing blend of action film.

The film’s screenplay is, however, a bit of a mess. It is a typical example of ‘sound and fury’, needlessly busy and complicated without actually being entirely coherent or interesting. There is a lot of backstory involved here that is slightly confusing for viewers unfamiliar with Chen Zhen or Fist of Fury. Characterisation is thin and liberally soaked in stereotype. Noble, conflicted hero? Check. Slightly comedic and cowardly sidekick? Check. Brutal over-the-top villain with a penchant for executing his own henchmen? Check. It’s screenplay by way of cut-and-paste, as if a checklist collaborated with a photocopier and filmed the results.

It is a keenly nationalistic film as well, but while other recent action films such as Bodyguards and Assassins represented their patriotism in an overly proud, noble way, Legend of the Fist does so by demonising the Japanese. There is to be fair an element of truth in that – the Japanese invasion of China was an atrocity of a horrifying scale – but to a 21st century viewer sensitive to racism it leaves a slightly bitter taste in the mouth.

The film’s saving grace is, unsurprisingly, its action. Donnie Yen is inarguably one of the most talented and appealing Hong Kong action stars ever, and as Chen Zhen he does not disappoint. The martial arts sequences here are extraordinarily impressive: knowingly over-the-top, overwhelmingly absurd and hugely entertaining. The film opens with Chen taking out an entire squadron of armed German soldiers using only a pair of bayonets. It’s a sequence so bizarrely excessive that I found it impossible to watch it without laughing. Later fight scenes follow in a similar pattern. Andrew Lau compensates for the shortfalls in the script by giving the film a highly glossy, stylised look. The film was shot on the same sets as Yen’s earlier film Bodyguards and Assassins, but Lau shoots his picture in a distinct enough way that you wouldn’t notice unless somebody told you.

Unfortunately slick visuals can only go so far, leaving Legend of the Fist as a superficially entertaining but ultimately shallow work of entertainment. Fans of action and Donnie Yen will likely find much to enjoy here. Fans of Lau’s exceptional Infernal Affairs will likely emerge disappointed.
Posted by Grant at 2:18 PM