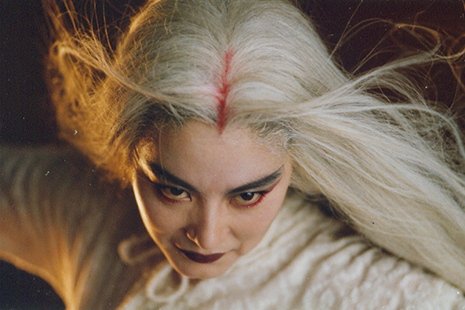 Cho Yi-Hang (Leslie Cheung) waits on a mountain peak for a majestic flower to bloom. It does so once every decade, and its petals can cure any illness. Through flashbacks we learn why he’s waiting there, who the cure is for, and what led his life along the course it took. It is a course populated with bloodshed, conflict, love and sex, witchcraft and sorcery.

The Bride with White Hair was one of my formative viewing experiences, viewed late at night on Australian TV channel SBS and met by my slack-jawed amazement and immense admiration. The film was produced in 1993, and presented a massive and overwhelming contrast to the sorts of action films that I (and, I suspect, other English-speaking viewers) was watching at the time.

The film was my first encounter with ‘wuxia’, a particularly Chinese genre of novel, comic book, television drama and film. The term literally means ‘martial hero’, and denotes a particular brand of martial arts-based period adventure. Wuxia stories present intensely noble and honour-bound martial artists and swordspeople fighting evil and injustice as they travel the land. They exist in a mythologised ideal vision of medieval China – the level of mythology varies from text to text – roughly analogous to European tales of chivalry, Japanese samurai drama or even the American western.

The Bride with White Hair is a vivid fantasy film, taking the wuxia tradition to an elaborate extreme of demons, witchcraft and Hollywood-style visual effects. It forms part of a string of similar films kick-started by Tsui Hark’s 1983 epic Zu Warriors from the Magic Mountain, and is to my mind one of the most easy-to-engage-with of the lot.

It is a wonderfully stylised film, with a beautiful sense of colour and tone. There is an overwhelming sense of otherworldliness to the piece, as well as a certain theatricality. It is, like many wuxia titles, a heightened film populated by heightened characters. It’s brilliantly directed by Ronny Yu, who displayed so much promise with this film – a promise largely unfulfilled by his later films, which include Warriors of Virtue, Bride of Chucky and Freddy vs. Jason.

Most of the film seems to have been shot with extreme wide-angle lenses, giving the film a slightly eerie and immersive tone that was typical of Hong Kong’s fantasy films in the 1980s and 1990s. The film is headlined by Brigitte Lin as the titular bride Lien Ni-Chang, and captured her at the very height of her popularity. By this time she’d already starred in the likes of New Dragon Inn, Peking Opera Blues and Swordsman II. She is an outstanding actor with a screen presence that’s almost unparalleled among her contemporaries. Co-star Leslie Cheung makes for a strong male lead, as he nearly always does. Francis Ng and Elaine Lui play Chi Wu-Shuang, a misshapen pair of conjoined twins who dominate Ni-Chang’s life.

Combining romance, action and fantasy, The Bride with White Hair is a thrilling introduction to both the wuxia genre and mid-1990s Hong Kong cinema. Asides from that, it’s also one of the finest fantasy films made anywhere. The film was popular enough that the cast and crew reunited months later for The Bride with White Hair II, which is substandard but still very enjoyable.
Posted by Grant at 8:07 PM