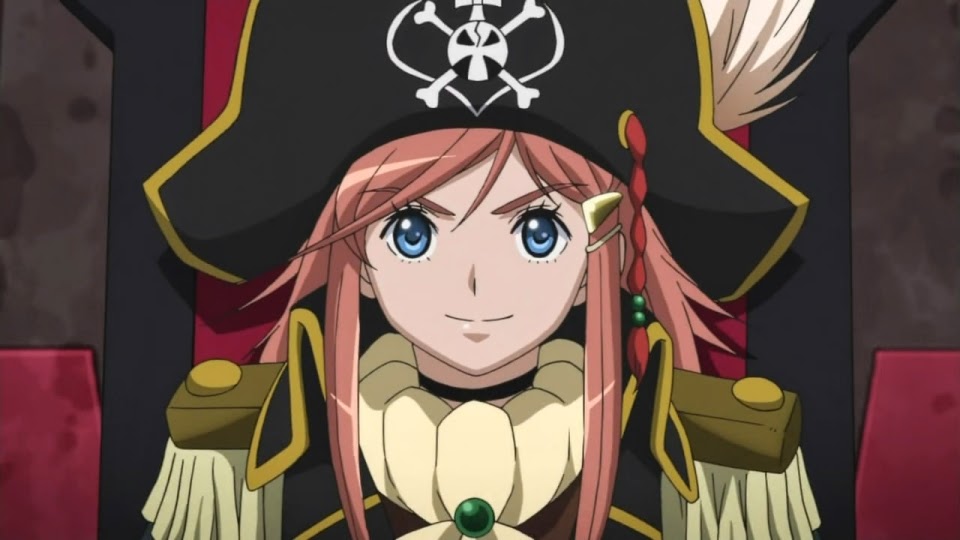 Resolved to follow in her father's footsteps, and with her government-sanctioned letter of marque in hand, Marika Kato takes her first step on the road to pirate legend with a raid on the cruise liner Princess Apricot. It might have taken six episodes, but Marika is finally captain of the Bentenmaru, and undertakes her first raid as a privateer.

I do still think that the production team could have squeezed the first five episodes into maybe three, but at this point that's by-the-by: Bodacious Space Pirates finally kicks into some form of high gear with a raid, a sword fight and a lot of well-judged humour. I may be taking my sweet time watching this anime, but I'm really enjoying each episode I see.

The episode begins with a fantastic journey into the bureaucracy required to gain a letter of marque and work legally as a privateer. Things are signed and stamped in triplicate. Meetings are held with government departments. Boxes are ticked. It's a whirlwind few minutes that had me in stitches - this is definitely the funniest episode of the series so far, and the humour keeps running throughout the whole 25 minutes.

It's a well structured episode for humour, because it keeps developing the story every few minutes. Securing the letter of marque runs just as long as it needs to before we jump to Marika undergoing training on the Bentenmaru (which is a gorgeous-looking spaceship, by the way, even if the stark CGI tends to jar a little against the hand drawn characters). After that we're only a few minutes before the dead-pan Chiaki arrives onboard - she's firming up as my favourite character in the show. Then there's Kane undercover on the Princess Apricot, then the raid, and the duel - the episode just keeps piling on scene after scene.

It all whizzes by: this is the strongest episode of the series thus far, and hopefully the momentum will continue - even if the momentum of my viewing habits do not. Six episodes in, and four have been good. That's a quality ratio of 67%.
Posted by Grant at 10:32 PM