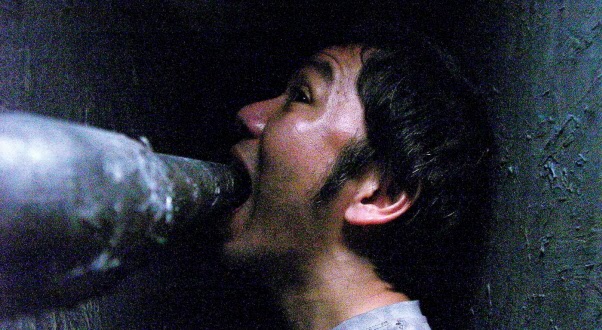 A man wakes up in a dark, coffin-like space. He can barely move, but move he must if he wants to survive, because he's bleeding from an abdominal wound. He wakes up again pressed between two walls, his open mouth straining against a long metal pole. He has to stand on tip-toes to avoid getting stabbed in the feet by razor-sharp metal spikes. As he slowly works his way through this cramped, claustrophobic labyrinth, he encounters a mysterious woman and struggles to piece together the fragments of his own memory.

This is Haze, a 49-minute long short feature written and directed by Shinya Tsukamoto - who also stars as the film's hapless protagonist. I'm a big fan of Tsukamoto's strange, low-budget breed of Japanese thriller. He first wowed audiences with his frantic 1989 film Tetsuo: The Iron Man but has since impressed with a number of idosyncratic, disturbing and fetishistic thrillers including Tetsuo II: Body Hammer, Tokyo Fist, Nightmare Detective and A Snake of June. Haze is one of his best works: provocative, nightmarish and daring.

This is a highly abstract film, that doesn't provide the viewer with context or backstory. Instead it throws us into the deep end and expects us to simply roll with the punches. Because of the tightly confined setting we rarely get to see anything except in extreme close-ups. I used to think that Neil Marshall's The Descent was the most claustrophobic horror film ever made. Tsukamoto has it beat. One scene in particular, as the nameless protagonist squeezes his way down a narrow passage, his teeth scraping against the pipe onto which he's forced to bite, is extraordinarily difficult to sit through. As a visceral experience of horror, however, it's absolutely remarkable.

I think there's enormous opportunity for short features such as this: there is often too much material to an idea for it to work as a short film (although Haze was originally edited to a briefer 25 minutes), but at 90 minutes or more the same idea would lose impact. The problem is finding a market for such films: too long to be a short and too short to be a feature. What's a director to do?
Posted by Grant at 5:00 PM