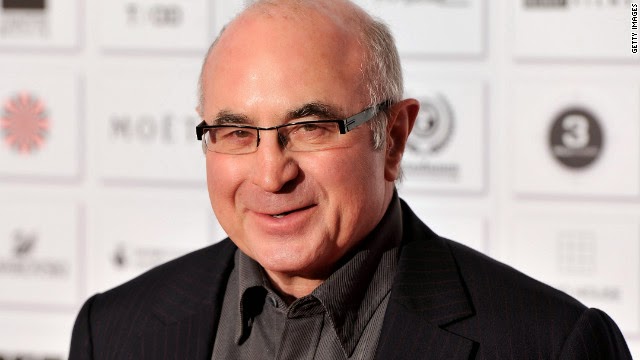 This week the outstanding English actor Bob Hoskins died, aged 71. He had retired from acting two years ago after being diagnosed with Parkinsons Disease, but his death is still a rather upsetting one. He's an enormously familiar face to generations of filmgoers through he starring or co-starring in the likes of Who Framed Roger Rabbit? and Hook, not to mention a wealth of other roles in smaller British films.

Sadly his 2012 retirement meant that his final role was as one of the dwarves in the underwhelming Snow White and the Huntsman. I'm relieved no one seems to be mentioning that one in his obituaries. Here are the five performances for which we should remember him (in chronological order).

The Long Good Friday (1980)
In his breakout role, Hoskins plays Harold Shand - a London gangster attempting to reinvent himself as a legitimate businessman, who gets mixed up the affairs of the IRA. This was an enormously controversial film upon its release, but now stands as one of the all-time classics of British cinema - due in no small part to Hoskins' performance at its centre.

Mona Lisa (1986)
Hoskins won both a Golden Globe and a BAFTA for his central performance as ex-con George, who is drawn upon his prison release to a prostitute named Simone (Cathy Tyson). The film was directed by Neil Jordan (The Crying Game, Company of Wolves), and Jordan allows Hoskins to create such depth in what could have been a simplistic character. This film's also worth watching for Michael Caine's excellent supporting performance.

Who Framed Roger Rabbit? (1988)
On the one hand, it's easy to simply cite Who Framed Roger Rabbit? as Hoskins' most famous film, and simply fail to fully acknowledge his skills and range in other works. On the other, Roger Rabbit is an absolute masterpiece of filmmaking. When you sit back and think about how Hoskins had to construct his performance against vacant spaces and weird visual effects apparatus a year before animators finished filling in his co-stars, it suddenly becomes apparent what a tour-de-force his performance here is.

Felicia's Journey (1999)
Possibly the least seen of these five films is Atom Egoyan's sinister drama, in which Hoskins plays a seemingly warm old man whose true motives and unsavoury backstory only become clear as the film goes on. The thing that always struck me with this film is that we're used to seeing Hoskins as a likeable Cockney lad, and we're used to seeing him as a violent gangster - but creepy? I wasn't prepared for a creepy Bob Hoskins. I'm still not sure if I am.

Last Orders (2001)
This drama was written and directed by Australia's Fred Schepisi, who is one of the world's best directors when it comes to drawing performances out of actors. Here Hoskins works as part of an oustanding ensemble cast including Helen Mirren (his co-star back in The Long Good Friday), Ray Winstone, Tom Courteney and Michael Caine. The performances are what make this film - it's like watching a master class.
Posted by Grant at 11:37 AM