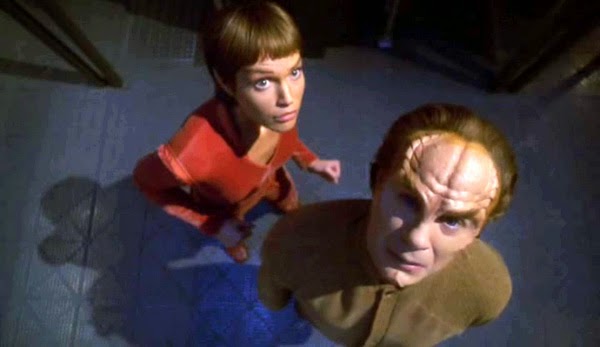 The Enterprise's course to Azati Prime is blocked by another growing energy field that will take weeks to circumnavigate. Phlox presents an alternative: he can put the entire crew into a comatose state, stick the ship on autopilot and fly straight through it - his Denobulan brain is immune to the effects of the field, and he can watch over and care for the crew while they're under. Once their journey begins, however, he and Commander T'Pol begin to suspect that they are not alone onboard the Enterprise.

"Doctor's Orders" is an admirable attempt to create a haunted house thriller out of an episode of Star Trek. It does this by putting Phlox and T'Pol on their own in an effectively empty Enterprise, and then making things go bump in the night. I call it an admirable attempt because I'm not sure it works in execution. It has some nice startling moments to make the viewer jump in her or his seat, but the ultimate reveal is a little underwhelming and far too obviously telegraphed in advance.

There is one massive asset this episode has, which is John Billingsley's performance as Phlox. He's a fabulous character and very well played, so any episode based around him is going to have a lot of appeal. This is another epistolary episode, narrated by Phlox as he writes a letter to his human counterpart on Denobula. I like this annual 'Phlox writes a letter' episode - it's a knowing nod to M*A*S*H, which had an annual "Dear Dead" episode each season as well.

On the other hand this episode is an elaborate 40-minute 'shaggy dog story', one that takes its sweet time getting to a conclusion that most viewers will spot by minute five. At the same time it seems like another annoying barrier between the Enterprise and its destination at Azati Prime. It feels like padding - there are still quite a few weeks left in the season and the production team don't want the Enterprise getting to the end too quickly.

Overall, while Billingsley's performance is admirable, the episode isn't really worth watching. That leaves Enterprise with eight good episodes out of sixteen so far, or precisely 50%. It's not surprising that it's felt so mediocre overall.
Posted by Grant at 5:07 PM