Star Trek: The Next Generation: "A Matter of Honor" 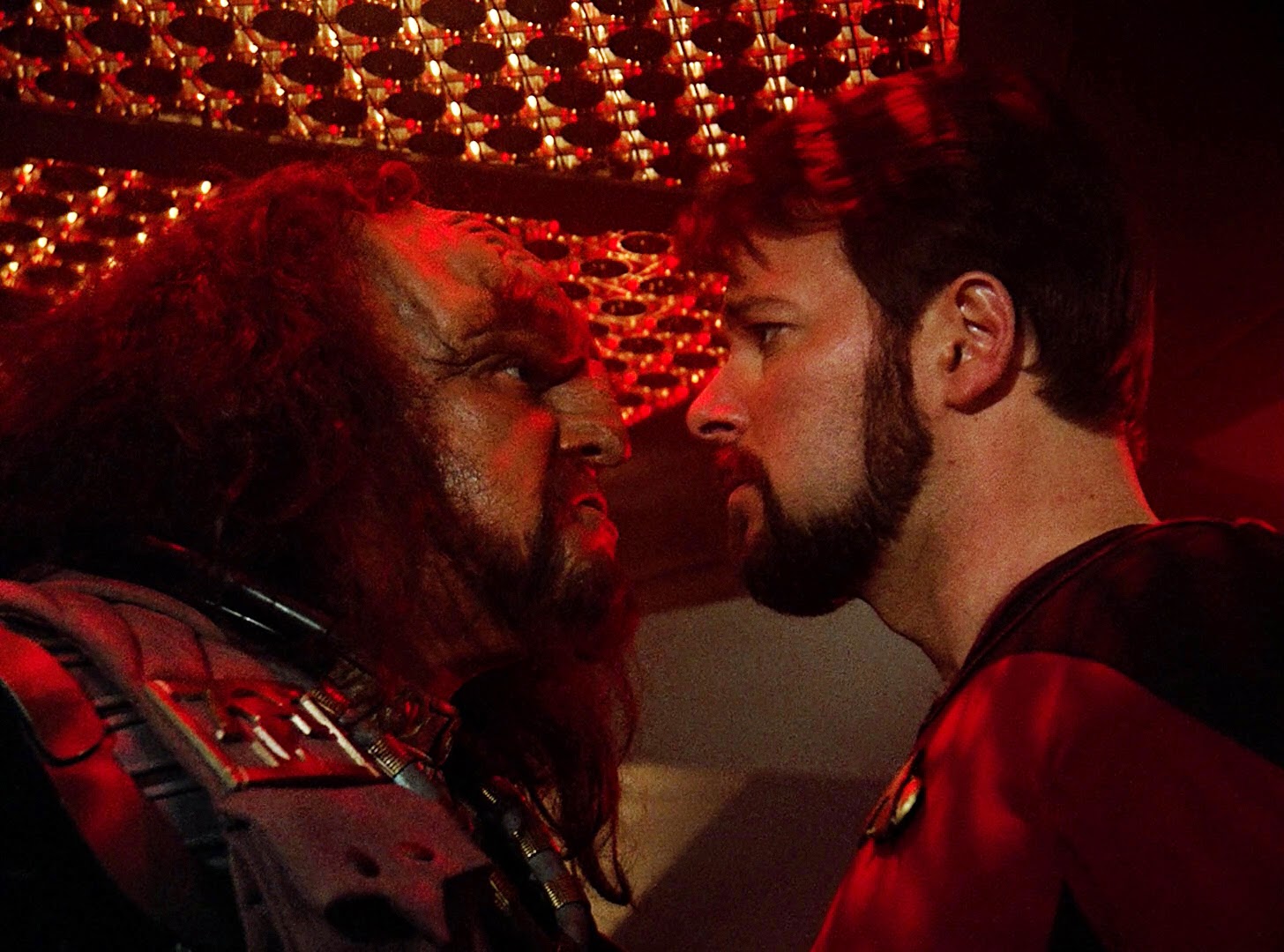 Commander Riker undertakes a temporary exchange to become first officer of a Klingon Bird of Prey. When its captain believes that the Enterprise somehow infected his ship with a metal-eating substance, he orders an attack - and Riker must choose how to negotiate his duties as first officer and those as a Starfleet commander.

Something odd happens to Star Trek: The Next Generation around this stage. It becomes good. I'm not entirely sure why or how it does. It's not that there haven't been good episodes already. According to my count there have been 11 of them. The thing is, while there have been good episodes (or at least broadly enjoyable ones) the series has been pretty awful. No one seems quite comfortable in the roles. The scripts feel lost somewhere between the original Star Trek and 1980s television. It's all been so damned wooden. Now the veil has lifted, and this really is the first episode of Star Trek: The Next Generation where I can actually recognise the series' tone and quality.

One major factor is that suddenly everybody in the cast seems relaxed. This is particularly the case with Jonathan Frakes, who's possibly the most underrated actor in the series. There is a delightful scene early on where Riker feasts on Klingon food in Ten Forward, and Frakes rather than play it for cheap laughs plays it for fun. That sense of fun is pretty key: Gene Roddenberry firmly dictated that in the 24th century interpersonal conflict would be a thing of the past. That's a terrible thing to hand to a writer, because conflict is the source of all drama. What happens from here is the realisation that if a cast of characters can't fight each other, they can at least be good friends and share a joke. This is the point where Picard, Riker, Troi and the gang start to feel like a loose kind of family. Where the series was cold and awkward, it's now rather warm and kind.

Considered on its own merits, "A Matter of Honor" still stands out pretty impressively. It's the first major exploration of Klingon culture that Star Trek attempted, and they do a stunning job with it. It's not just the food - it's the strange, brutal shipboard culture that Riker discovers. If the captain fails to perform his duties, it's Riker's job as first officer to assassinate him at take his place. The same goes for Riker's second officer if he fails to perform. Each of the Klingons has a separate personality: they're not just aliens, they're people.

So we're now up to three good episodes out of eight for this season (38%), but a crucial corner has turned. I have a feeling that the quality ratio for Season 2 is just going to rise and rise hereon in.
Posted by Grant at 9:11 AM