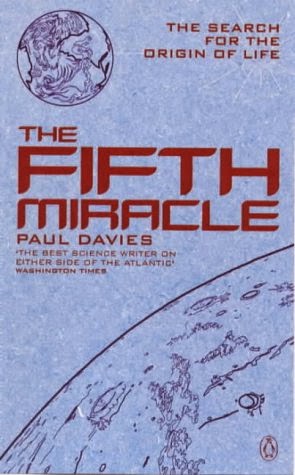 The Fifth Miracle is a wonderfully engaging popular science book by Paul Davies, that runs through the theory, evidence and arguments for how life on Earth actually began. It's one of the best science books that I've read because it's very readable, and Davies has a very concise and entertaining manner of writing. It's also more than 15 years old, which led me to ponder the fate of old science books.

Science is constantly changing. New theories are developed and hypotheses tested. Information gets superceded, or contradicted, or replaced.

There is a half-life to scientific writing that simply doesn't exist for fiction. A work of art remains valid no matter how old it becomes, or how many other works of fiction are printed or performed after it's released. This simply isn't true for scientific writing - once the science is out of date the book is arguably worthless.

This seems like an enormous shame. Let's take The Fifth Miracle as an example: it's a beautifully written book. It feels like a very personal book, as if Davies is taking the reader in hand and enthusiastically explaining how we think life on Earth was formed. There is a genuine artfulness to the prose that by-and-large will go unnoticed. We don't read non-fiction for the turn of phrase or the vividness of the imagery. We read non-fiction for the information it contains. As a result writers like Davies run the risk of going unnoticed for the artists that they are.

Thankfully in the case of The Fifth Miracle I don't think science has advanced too far beyond what Davies proposes, so it remains a valuable resource on the origins of life. That probably won't be the case forever, at which point the book will be discarded, allowed to fall out of print and become obsolete.

I don't think there's a solution for this: certainly I don't think publishers should continue printing and distributing books with out-of-date information. I suppose I just think it's important to celebrate the quality writing in these books for as long as we are able. I love reading popular science books, and The Fifth Miracle is one of the science books I have loved the most.
Posted by Grant at 9:26 PM

Email ThisBlogThis!Share to TwitterShare to FacebookShare to Pinterest
Labels: books, Books of May, science, UK