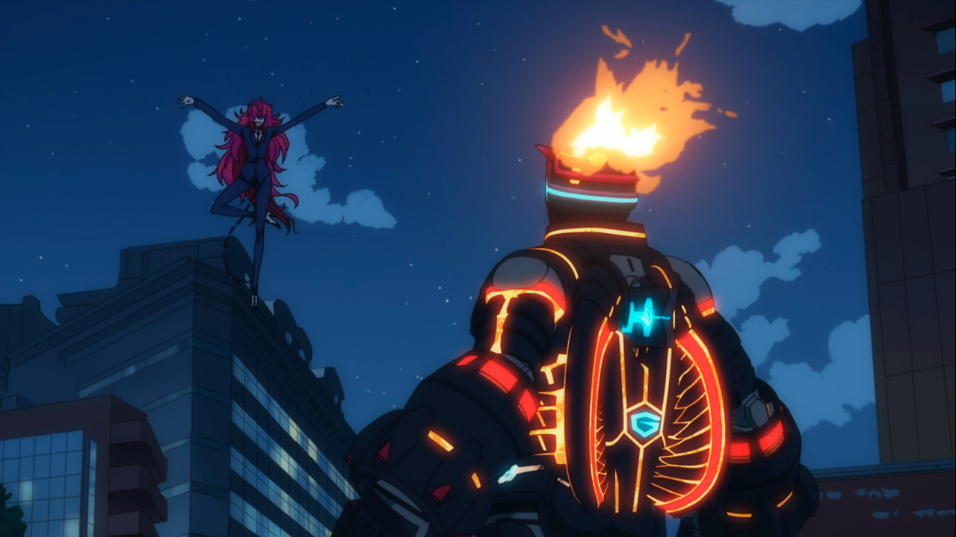 As a cable car looks set to collapse, killing the passengers inside, Rui activates the Crowds: strange, alien creatures seemingly controlled by GALAX users, who save the day and keep things together until help arrives. Meanwhile Joe has a violent encounter with Berg Katse, a smiling alien with the ability to kiss a human, assume its identity and go on a violent rampage.

One of the weirder things about Gatchaman Crowds has been how tenuously it has been connected to the original Science Ninja Team Gatchaman with which it shares a title. This episode drops another connection into the frame with the addition of Berg Katse, a new alien villain who shares a name with the original Gatchaman's antagonist (viewers of Battle of the Planets will know the character as Zoltar). Beyond the name and the androgyny there doesn't seem to be anything connecting the two characters, but it ties in with the other soft connections that the series has been gradually forming.

The scenes of Berg's rampage are actually rather confronting for a series that's been jumping back and forth between amusing light comedy and science fiction action. It's all beginning to form something rather complex that's either going to pull together by the end and be fantastic, or collapse into a horrible confusing mess. I really hope it's the former, because in terms of aesthetic and tone I am really enjoying this series.

Berg's arrival does appear to be drawing the series together already: Paiman already knows who Berg is, and apparently lost a close friend to them. There's clearly a connection between Rui and Berg as well, and Rui appears to have somehow gained a NOTE from them as well.

I really like Rui: his cross-dressing is another gentle echo of the original Gatchaman, in which that series' version of Berg Katse was transgendered. I love his invention of GALAX and its associated Crowds initiative: it's fascinating how this series began by introducing a super-team and has already partially supplanted it with what seems to be a superior option. I'm waiting for something to go terribly wrong with GALAX, with the Gatchaman team coming in to save the day.

There's some nice stuff in this episode for Joe who, as a fairly solemn and quiet character, hasn't entirely been getting the attention that he deserves. I also like his superhero alter-ego (pictured above), who looks more than a little like DC Comics hero Firestorm.

Three good episodes out of four brings the score up to 75%. I'm really enjoying this series. Hanabee are releasing an Australian DVD and bluray of Gatchaman Crowds in August: this is your advance warning to check it out when it arrives - or to go check it out now at Crunchyroll.
Posted by Grant at 10:09 PM