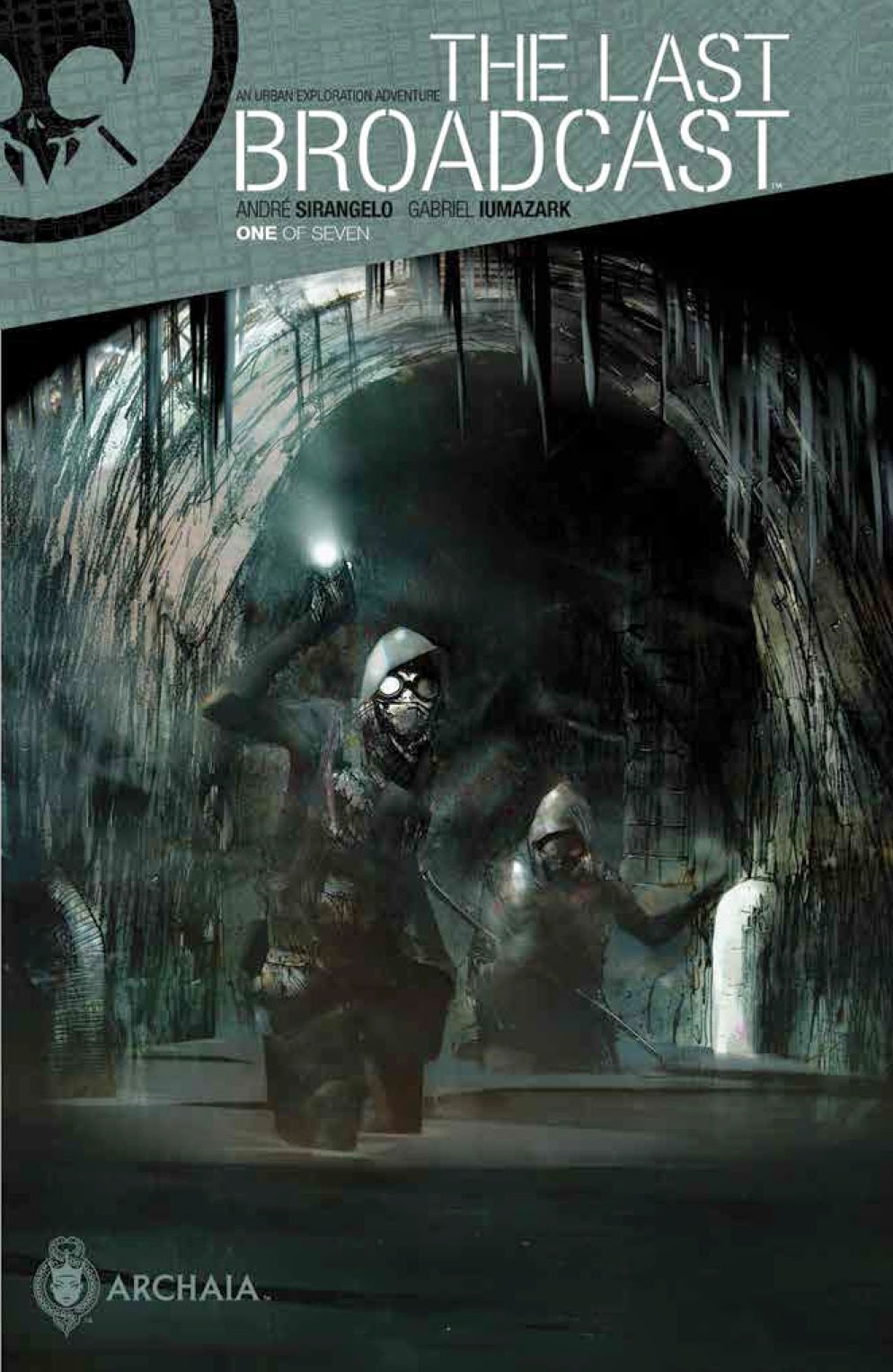 Boom Studios have certainly got my attention with their current spate of new miniseries, each of which is cleverly re-positioning the publisher as a minor competitor to Image. Their latest effort is The Last Broadcast, a seven issue miniseries about urban exploration and 1930s stage magicians.

It's an intriguing first issue, but also a slightly confusing one. The book jumps forward and back between three different time periods: an aspiring magician named Ivan wakes up in a hospital and learns that his friends are dead; we jump back to see Ivan and his friends explore a hidden room in the city's sewer system; we jump back to see Ivan's keen interest in 1930s magician Blackhall the Incredible - whose secret room Ivan and his friends may have found. Thankfully it's the good kind of confusing: while this first issue is a little disorientating the first time around, it hooked me in and has left me very keen to find out how the story develops.

Gabriel Lumazark's artwork is stunning, and reminds me of some of the more adventurous books with which IDW first gained popular attention. It has a very distinctive look, that really set this book out from the other comics I purchased this week. The overall presentation is top-notch, with some intriguing additional material at the issue's end and a really nicely printed cover on a thick cardstock and a silk finish. First Lumberjanes, then Translucid, now this: Boom really know how to get a reader's attention. (4/5)

I think this is the first issue of Batman and Robin not to use Patrick Gleason and Mick Gray on art. The replacement team are excellent, however, but I do hope this is a temporary fill-in and not a breaking-up of the creative team. This issue sees the reunion of Batman and Frankenstein - last time they met Bruce took Frank's entire body apart to see how he worked, so their meeting here is understandably a little angry at first. I was a big fan of Frankenstein and the Agents of SHADE, so seeing Frank back in the comics again made me rather happy. Apparently he's in Justice League Dark now as well. As always, this is a solid and enjoyable superhero book that leads into what looks like a pretty serious finale next month in Batman and R'as al Ghul. (3/5)

Here's a bit of a temporary climax: Batman goes after Professor Pyg while Carmine Falcone goes after the Penguin. It's not the most inventive issue DC has published in this series, but it does tie up some of the initial plot threads for this weekly. I'm happy to see Pyg get highlighted: he was a great creation by Grant Morrison and over time I can see him - and his creepy army of Dollotrons - become a regular fixture among the standard Batman villains. Guest artist Emanuel Simeoni didn't particularly impress me: there's one illustration of Catwoman that's positively pornographic. (3/5)

Bizarrely, the thing that struck me the most about this issue of Daredevil, which is fabulous as always, is that Matt Murdock quotes Saga. It seems that Vaughn and Staples' sci-fi epic (which returns this week and is reviewed below) is only getting more and more popular. This is another knockout issue from Waid and Samnee: I mean Samnee's art is simple, slick and immensely easy to read. Waid continues to do what he does best: the story moves rapidly and smoothly, he regularly surprises me with his story choices, and the backstory and continuing drama is allowed to slowly trickle out in a gripping fashion. Issue #1 had me asking 'so what happened to Foggy?'. Issue #2's developments had me shouting 'wait, what the hell did happen to Foggy?'. This issue has me shouting 'no, seriously Waid - what the hell happened between the two series to Foggy?'. (5/5)

It's been a long time coming, but DC's first major event series since Flashpoint finally comes to a conclusion that's rousing, dramatic, violent, unexpected and occasionally jaw-dropping. It is a showcase for Lex Luthor, expanding and redefining the character in a manner that I don't think has been done before. It sets up next year's major crossover event in a wonderfully ominous fashion, and ends up on a final page that's simultaneously completely obvious and bizarrely unexpected. I usually get quite down on big event miniseries, but this final issue is absolutely the best of the entire Trinity War/Forever Evil epic. It's a cliche to say that 'nothing will be the same again', but certainly there are more than a few twists in this issue from which DC's going to struggle to back away. (5/5)

I'm assuming, going by the first page of this issue, that Vaughn and Staples are now trolling their audience for shock value and giggles. In this issue the story has jumped ahead by about 18 months or so, and gives us a fairly brief chance to reunite with the regular cast and see where their lives are up to. It's generally very funny stuff, beautifully illustrated by Staples as always, and then in true Saga style kicks its readers in the most delicate parts on the final page. I was a little worried by the previous six-issue arc of Saga, which was excellent on an issue to issue basis but felt a little lost in retrospect. Hopefully this arc will have a bit more forward momentum: it's certainly started well. (4/5)

Michaelangelo finds a malfunctioning Footbot and somehow convinces it to become his sidekick on a series of vigilante adventures. Mikey is usually the one Turtle who irritates me, but with the current CGI Nickelodeon cartoon (upon which this comic is based) he's the funniest character of the whole show. This issue captures that humour perfectly, with more than a few moments of comedy. It's a breezy, entertaining read. A five-page back-up strip at the book's end gives us "Cooking with Krang", which was a nice amusing bonus. All up, this is just fun stuff. (3/5)

While the present-day aspects of this story are entertaining enough - Thor and SHIELD versus the Roxxon Corporation - it's the far future storyline that has me hooked. This issue Thor's daughters come to the rescue with all of the roller derby-style attitude and violence we witnessed back in the "Godbomb" arc. Is there a set of characters more deserving of their own monthly title right now? I'm straining to think of anything else. Three angry viking women versus Galactus for the fate of a dead Earth: this is stunning, epic comic book action. (5/5)

This is yet another in a series of issues Azzarello's been writing, slowly building up the tension and drawing his entire epic to a massive climax. Every month I start this issue thinking it's dragging on too much, but by the end I'm hyped as anything for the next part. The risk of this strategy is that Azzarello needs to have a hell of a climax up his sleeve to make the past three years worth it. The Amazons of Paradise Island get a lot of attention this month, which I appreciated. We also get to see the unfortunate results of last issue's cliffhanger ending. So, in summary, I'm still hooked and enthused, but the pressure is on for Azzarello (as well as superb artists Cliff Chiang and Goran Sudzuka) to deliver. (4/5)

Winner of the Week: Forever Evil - this is how you should end an event.
Loser of the Week: Nothing bad this week at all, and three five star comics. Not bad at all.

This is the 800th post on The Angriest. Thanks for reading!
Posted by Grant at 2:20 PM