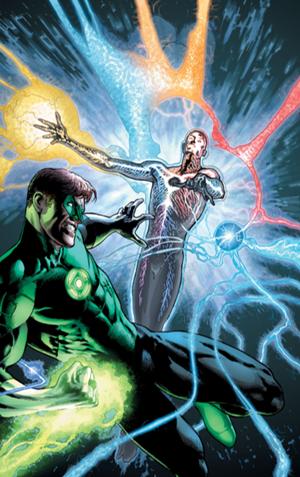 Before the New 52 launched in September 2011, Green Lantern was one of DC Comics' biggest success stories. After many years as a second-string title, it had been revitalised by writer Geoff Johns into one of the publisher's tentpole franchises - so successful that a Green Lantern motion picture got produced by Warner Bros ahead of The Flash, Wonder Woman and numerous other potential movie properties. While Johns remained to spearhead the Green Lantern Corps into the New 52, he has since departed the lead title - and the entire franchise seems to be in trouble without him.

If you want to know how much trouble Green Lantern is in, consider this: total sales across all five books in March 2014 was 136,797. Jump back one year, and that total was 191,248 - and that was across only four books. In the past 12 months the range has declined by 28%. Jump back to March 2012, and those four books sold 219,942 copies. Let's jump back even further to March 2010, when there were only two books in the line and between them they shifted 174,089 copies. That splits up to an average of about 87,000 copies per Green Lantern title. That average in 2014 is down to just over 27,000. In the past four years Green Lantern sales have effectively declined by almost 70 per cent. It was a tentpole for DC. Now it's just another second-string title.

Since September 2011 DC has published five ongoing Green Lantern titles. Of these, all five are currently ongoing - Larfleeze is selling so badly it has to end soon. The average number of issues per title currently sits at 26.

All sales data is taken from Comichron, and is the estimated sales of comics via Diamond Distribution to retailers - that is, what went into the stores, not what was actually sold to customers.I will be removing sales from September 2013, however, when DC ran its villain month. Some titles had as many as four issues in that months, and others had none, and sales regularly bore no resemblance to the titles they were ostensibly a part of. It's clearer without them.

Green Lantern
Green Lantern was a very strange book in regards to the New 52. Since it was selling so well before the relaunch, DC pretty much left the story intact. This resulted in a weird situation where, despite being advertised as #1 of a whole new series, Green Lantern's first issue was pretty much impenetrable to anybody not already reading it. It was broadly enjoyable stuff too, assuming you could follow it, but mini-event after mini-event made it ultimately rather tiresome. I dropped it shortly into Robert Venditti's run - which was marked by another mini-event. 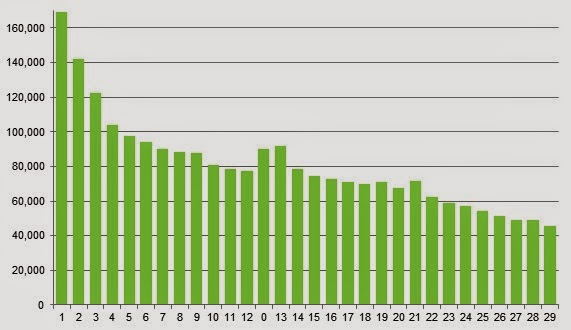 Those may be sales above 40,000 units in March 2014, but that is not a healthy picture. The introduction of a new Green Lantern (Simon Baz) in issues #0 and #13 promised a lot but ultimately delivered little. A change in writer has done little reverse the book's fortunes. March 2014 sales (45,797) are down 34% compared to March 2013, and down 49% compared to March 2012. DC needs to give this title a real shake-up if they want to improve its sales. I think they were onto something with their new protagonist - it's just a shame they didn't follow through. 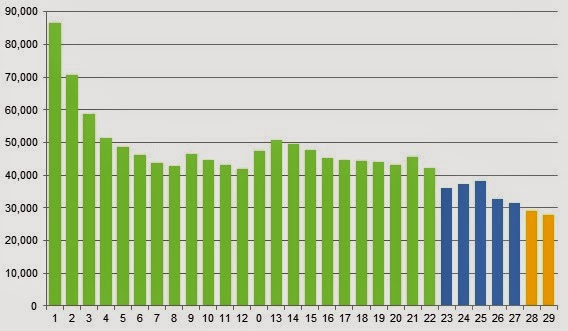 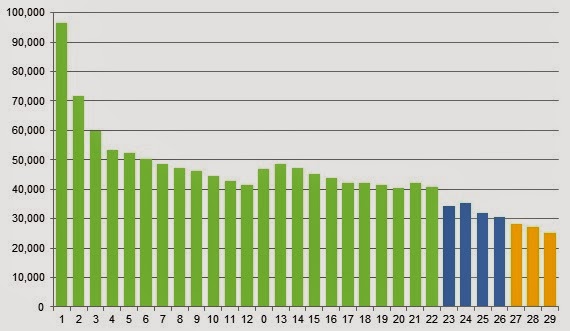 New Guardians' sales trajectory mirrors that of Green Lantern Corps fairly closely. Interestingly, it actually launched quite a bit higher, but it's also fallen slightly more sharply. March 2014 sales (25,296) were down 40% compared to March 2013, and down 48% compared to March 2012. At its current rate of decline New Guardians will be selling under 20,000 copies a month by July this year and under 15,000 by October - not a good look. 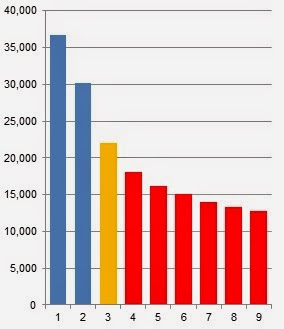 Despite declining sales across four Green Lantern titles, DC still thought it could stretch its luck with a fifth. Larfleeze is a comedic title about the avaricious "Orange Lantern", so greedy that he wants all of his colour's colour, thus there's only one of him. Oh the laughs we had. Basically this is a one-note joke character inexplicably given his own monthly series, and the market has responded accordingly.

What's particularly nonsensical is that Larfleeze already had a continuing segment in the failed New 52 title Threshold, which only made it to issue #8 before getting nixed. I suspect with sales now below 13,000 after just nine issues, Larfleeze will run just long enough to fill two trade paperbacks before getting cancelled.

Red Lanterns
Another book, another variation of Lantern: this time it's the incredibly angry Red Lanterns, who shout a lot and vomit blood as part of their superpower - just DC doing it's part for all-ages, engaging superhero fiction. A revision to the book midway saw popular Green Lantern Guy Gardner change colours - the change hasn't really helped lift sales. 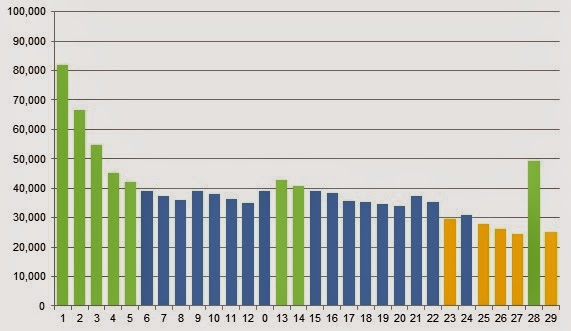 Red Lanterns shed a lot of readers early, and stayed remarkably stable in terms of sales right up to issue #21. Then things have - a double issue with Green Lanterns #28 notwithstanding - fallen into decline. As with the other four core Lantern books, the mass change in creative teams with issue #22 did not stimulate sales. Rather, it gave thousands of existing readers an excuse to drop the book. March 2014 sales (25,153) are down 29% compared to March 2013, and down 33% compared to March 2012.
Posted by Grant at 11:01 PM