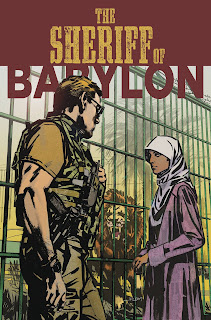 I have been praising the merits of The Sheriff of Babylon for several months now, and every new issue released reminds me all over again just how strong and dramatic a series it is. Over the past month DC Vertigo has undergone a shake-up, with senior editor Shelley Bond - who oversaw this book's release - let go, and the line falling under the creative control of DC Comics proper. I am not overly confident we are going to see books of this style and calibre in the coming years, so this may wind up being the last hurrah for a once-great publishing imprint.

This book has a phenomenal sense of panel-to-panel timing. One scene in this issue in particular is one of the most intense and harrowing sequence I have read in a long time, and the manner in which the events play out is striking and immensely dramatic. Mitch Gerads' artwork has a phenomenal sense of gritty realism to it, and that realism makes each issue's more violent moments even more effective than one would normally see. Tom King's plot is developing wonderfully as well, taking its time and ensuring there is a strong sense of place and a deeply effective tone that both run hand in hand with the narrative.

This is the best American comic book in publication at the moment. Tom King, who has also impressed me deeply with his work on The Omega Men and who is about to take over Batman in June, is a writer to watch and follow. (5/5)

Under the cut: reviews of Batman Superman, Poe Dameron and Rat Queens.

This latest instalment of Peter J. Tomasi's "Last Days of Superman" storyline feels an awful lot like treading water: Superman, Batman and Wonder Woman head to China in pursuit of the rogue duplicate Superman - only to find themselves in a pitched battle with Chinese superhero team The Great Ten. On the one hand it's great to see the Ten back in action for the first time in the New 52. On the other, once the dust settles and everybody apologises, there's precious little else that happens. It's a 20-page issue that could have easily been told in about four. (2/5)

This second issue of Force Awakens prequel Poe Dameron is reasonably entertaining, but creatively redundant. There is a spark of originality to most of Marvel's other Star Wars books, but here it all feels competent yet generic. New villain Agent Terex provides a little bit of interest, but all in all it is just by-the-numbers space adventure. There's quite a bit of that about at the moment, so a book that doesn't stand up is probably not worth reading when compared to others - like Boom's excellent new miniseries Joyride. One for the keen Star Wars fans only. (3/5)

The first issue of a new story arc and, if Wiebe's comments on social media are to be believed, the last issue of Rat Queens for the foreseeable future. If true, it's both a shame and potentially a mercy. This is an oddly weak issue that shows off a bunch of returning characters but really does not provide anything new in terms of story direction or hooks for the future. It does not even end with a cliffhanger, rather an abrupt end that suggests a page went missing somewhere in the edit. Tess Fowler's art has always felt like something of a let-down compared to earlier artists as well. It's a fairly ignominious end for what had been a sensational comic book. (2/5)
Posted by Grant at 7:17 AM