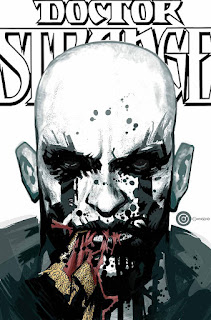 The mysterious Empirakul have travelled from one dimension to another murdering every magician and sorcerer they have encountered, and destroying all remnants of magic across countless realities. Now they have arrived on Earth, decimating its magic users and capturing Stephen Strange. Now in issue #7 we finally get some back story about their lead Imperator, and some indication on where the storyline is headed from here.

There is still a lingering problem over this series regarding just how similar this "Last Days of Magic" story arc is to Jason Aaron's "Godkiller" arc on Thor: God of Thunder. That story, which was exceptional, followed an alien invader whose civilization had been destroyed by gods and had thus transformed himself into an all-powerful god-destroyer. Here it's exactly the same origin and story, only with a word-replace from 'gods' to 'magic'. The writing is good, the characters and engaging, and Chris Bachalo's artwork is busy but energetic, however I suspect many readers will have seen it all before. I suspect anybody who did not read Aaron's earlier story will enjoy this a hell of a lot more than those who did. As one who enjoyed "Godkiller" immensely, this new volume of Doctor Strange is just a tiny bit unsatisfying - still great, but I feel it could have been even better. (4/5)

Under the cut: reviews of Black Canary, Micronauts, Superman Wonder Woman and 3 Devils.

Dinah's globe-trotting adventure continues with a battle in a German concert venue against a 1980s pop music demon. That sentence alone sells Black Canary #11 pretty well, and it benefits from great art by Sandy Jarrell and really engaging and likeable characters. One more issue and this title wraps up, but it's great to see the New 52 pop star version of Black Canary is shifting over to a relaunch of Birds of Prey in July. She works best with Batgirl and Huntress anyway. (3/5)

The Micronauts are one of those weird pop culture artefacts over which a small minority of hardcore fans fuss madly while the broader comic-reading community are likely to scratch their heads and move on. There is a science fiction adventure kicking off here, but in all honesty it is not a particularly original or engaging one. The characters do not stand out, and while there is some fairly nice artwork - the work of nine people, mind - it simply never manages to get out of first gear. As it's both expensive and a little dull, Micronauts is a little difficult to recommend. (2/5)

I just flat-out don't like the idea of Superman and Wonder Woman being a romantic couple. It is not the loss of the Superman-Lois Lane relationship, but more the broader idea that Superman in love with an ordinary non-super-powered woman is a lot more interesting than two god-like beings falling for one another. Despite that there is some nice story development in this fourth issue of "The Last Days of Superman". A violent man claiming to be Superman - and exhibiting his recent solar burst powers - has been taken prisoner by ARGUS, and that not only draws Superman and Wonder Woman to see him but also heralds the return of recent super-villain Ulysses. The complications are slowly building up here - I just hope Tomasi finds time to properly resolve them in this storyline's final four issues. (3/5)

Now that we're two issues in, I have really become quite taken with Bo Hampton's horror-western hybrid 3 Devils. Thus far the horror has taken a relative back seat to the western elements, but the beautifully composed old-fashioned artwork is enormously appealing and Hampton takes great care here to flesh out and develop his two lead characters. There's also a wonderful sense of play, with Hampton juggling apparent clichés like vampires, gypsies and zombies but blending them will real issues like racism and bigotry, and the iconic visual trappings of the Old West. It's wonderful. (4/5)
Posted by Grant at 5:00 PM