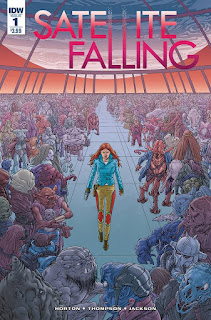 In the future a massive satellite orbits the Earth, containing 75,000 different aliens. One human lives among them: Lilly, a bounty hunter still mourning her girlfriend's death some months previously. After getting too close to one of the police officers, Lilly finds herself blackmailed into helping out on an undercover sting operation.

Satellite Falling is a smart, engaging science fiction series, which seems ready to sit quite comfortably alongside the likes of The Fuse and Copperhead. In this case it's perhaps just a little bit more adult, with sex, violence, people trafficking and drug dealers, but it's all handled in a smart and engaging fashion. Stephen Thompson's artwork is stunning, and pretty much seals the deal. I am definitely going to be reading the second issue.

It is also great to see IDW continue to expand its line-up with more of these original titles. I remember when the publisher first started it was a hotbed for hot new artists and writers, with all manner of exciting projects. Somewhere along the line market forces pushed it into a publisher of media tie-ins and spin-offs. While some of those have been perfectly enjoyable, their best work always seems to be where the ideas are the most original. (4/5)

The glowing false Superman leads Lois Lane to a completely different Superman - this one the original DC continuity Superman living in hiding with his own wife Lois and their son Christopher. The New 52 Superman, along with Batman and Wonder Woman, is hot on their trail. About halfway through the issue I started getting flashbacks to that old Red Dwarf episode with the "Rimmer from the double-double future" - there are simply too many Supermen flying around this story now for the narrative to have any kind of coherency or drive. I truly hope things pick up in the last few issues, because after such a solid beginning it really deserves a solid conclusion. (2/5)

It is great to see DC giving Riley Rossmo a shot at providing art for one of their key titles. I have been a big fan of Rossmo's art for several years, and anything that gets him greater exposure with a large audience is a good idea. Sadly he's illustrated what is effectively filler: DC ran this volume of Batman to the requisite 52 issues, but Scott Snyder and Greg Capullo's run ended at 51. All that is left is yet another one-shot about how Bruce Wayne's childhood trauma affected him as Batman decades later. It looks nice, but Tynion's script is deeply ho-hum. A shame. (2/5)

A new issue and a new story arc for Star Wars' most enduring and iconic villain. After a fairly continuity-light story arc on the planet Shu-Torun, we dive straight back into the sort of inter-film continuity overload that first made Darth Vader so enjoyable. Here we see the in-construction Super Star Destroyer Executor for the first time, and observe a great conversation between Vader and the Emperor. For Star Wars fans it is back story gold,and Gillen writes both characters exceptionally well. A back strip with art by Mike Norton sends Vader's homicidal droid companions off on their own adventure, which is wonderfully entertaining. (4/5)

Gotham Academy ends not with a bang but with the proverbial whisper, its momentum and energy entirely expired on this ill-considered, overly-long portmanteau arc of short strips and character vignettes. Part of me has been impressed that such a wide range of talent was pulled in to create the "Yearbook" arc, but another part of me is just bored with the end result. A second volume of the series is due for release later in 2016, not to mention a Lumberjanes tie-in beforehand, but to be honest I suspect the drive is gone and the upcoming relaunch will do little to reverse the book's fortunes. I feel a lot of goodwill on the part of the readers was wasted here. (2/5)

Some issues of Invader Zim have been fairly silly fluff, but others have been pitch-perfect recreations of the original television cartoon. Issue #9 is that second kind of issue. The dialogue sparks like an original episode, the art is fully accurate and beautifully laid out, and all in all it feels like one of American television's best comedic properties has returned fully-formed onto the page. It is exactly what this sort of tie-in book should be: beloved characters, hilarious comedy, and Gir with a head full of honey-soaked puppies. (4/5)

Since it started six months ago, Ninth Wave has followed a pretty familiar yet very entertaining formula. It showcases the work of the ecological activist group via vignettes, with just the key plot elements and the minimum necessary characters to show off any given situation, mission or crisis. This issue it's about big game hunters in Central Africa. This has been a highly enjoyable miniseries; unnecessary in terms of the original series The Massive, but providing a pleasant prequel for the lead characters all the same. (4/5)
Posted by Grant at 7:21 AM