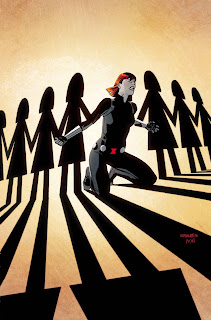 Black Widow has been unwillingly forced to work for a villain while on the run from SHIELD. Her mission takes her back to Russia where she is forced to confront her own past-

-and I'm going to stop the synopsis right there, because already it's showing off a real problem with Black Widow. Natasha is always confronting her past. She wallows in it. Everything in her adult life seems to refer back to or directly involve her childhood and adolescence as a trained Russian assassin. I used to think that Daredevil was the most self-obsessed and regretful superhero in America, but I think Natasha has taken the crown. I think there are only so many times a character can revisit the same emotional beats before it gets tiresome. Not even Bruce Wayne has wallowed in his tragic past this much. It is tiresome.

That's a shame, because Samnee, Waid and Wilson are a stunning creative team, and on a panel-to-panel basis their storytelling is second-to-none. After their sensationally inventive and bright Daredevil run I was hoping for something just as inspiring from their Black Widow. We're three issues in and thus far we simply are not getting it. Great plotting, great art, but so annoyingly derivative. (3/5)

Under the cut: reviews of Detective Comics, Revival and The Wicked + the Divine.

Jim Gordon is reunited with his former marine squad as they fight a mummy-worshipping death cult in the Middle Eastern desert. The first issue of this story was fairly bold, entertaining stuff, taking Gordon's Batman out of Gotham and throwing him into a whole new kind of story. This concluding issue is still enjoyable, but whether it is the brevity of the conclusion or a lack of originality in its telling it simply fails to live up to the original's potential. Good, but from the last issue it feels it could have been a lot better. (3/5)

The last few issues of Revival have built a great sense of rising tension. Em and Dana look to be running out of ways to hide from the authorities, and the situation inside the revived facility looks ready to explode at any moment. When things peak, they are going to peak violently, so there's a remarkable amount of suspense building each page until it inevitably does come to a climax. Mike Norton's artwork continues to impress me: he's one of my favourite artists working in comics today, and has a wonderful handle on expressing characters' emotions. (4/5)

The Wicked + the Divine continues to scream wildly towards a conclusion as the action quotient pretty much overthrows all attempts at subtlety or nuance. It's a runaway climax that the book has earned, thanks to a much slower, more intellectual story arc immediately beforehand. By building up their house of cards issue by issue Gillen and McKelvie have more than earned the right to now flip the table. It's glorious and deeply satisfying fun, which is enhanced by Matthew Wilson's incredibly bold and vibrant colours. (5/5)
Posted by Grant at 9:31 AM