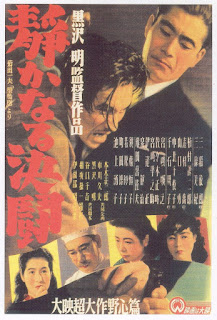 Dr Kyoji Fujisaki (Toshiro Mifune) is an army doctor during the Pacific War. When operating on an injured soldier, he accidentally cuts his finger and is infected with syphilis. Six years later Kyoji continues to practice medicine under his father (Takashi Shimura) while keeping his unsuspecting fiancée (Miki Sanjo) at bay and ensuring his ongoing infection remains a secret.

Akira Kurosawa's eighth film is a full-bore melodrama, replete with overwrought emotion, sobbing fits and lingering pained glances. It marks Kurosawa's first break from Toho Studios; this film was produced by rival production house Daiei instead, while a production workers' strike ground the former studio to a halt. The director brings along with him several regular collaborators, including actors Shimura and Mifune. This was his second film with Mifune after Drunken Angel, and this time the actor takes the lead role with Shimura relegated to a supporting position.

Sadly this is Kurosawa's least effective film to date, with a story too simple to last the full 95 minutes and characters whose over-the-top emotional turmoil destroys most of the opportunities for realism or nuance.

Toshiro Mifune's magnetic presence dominates the film, and it's a shame he isn't given that broad a range of emotions to perform. When he does finally break down towards the film's climax, sobbing over how his infection has destroyed his life, it's a tremendous relief because Kyoji's bottled-up personality has been infuriatingly contained up to that point. Regular Kurosawa actor Takashi Shimura is solid in the role of Kyoji's father, but like Mifune doesn't have that much to actually do as an actor. 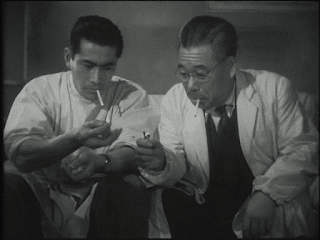 There is one unexpected gem among the cast of characters, which is Noriko Sengoku as Minegishi. She's an apprentice nurse in Kyoji's practice, trained on the job after he saved her from committing suicide. She begins the film brash, blunt and disrespectful of others. She finishes the film a fully-trained professional and responsible single mother. Unlike the rest of the cast, her transformation from beginning to end feels naturalistic and believable. Sengoku's performance is far livelier than that of her co-stars, since she's received much more dramatically fertile material.

The story itself feels remarkably weak and simple, and regularly lapses into tedious moral lectures. The manner in which it addresses the risks of syphilis feels like something a school would screen to a class of teenagers. Of the eight Kurosawa films so far it's easily the least effectively written. The direction also feels a little underwhelming, although there are a few nice visual moments that puncture an otherwise humdrum experience. Kurosawa rushed into making this film to keep busy during the Toho strike, and to a large extent that shows.

If there's a silver lining to the film it's the open-ended manner in which it concludes. Based on the contrived and superficial goings-on throughout the film it seems inevitable that Kyoji will cure himself of syphilis, confess all to his long-suffering fiancée, and share a happy ending. Instead his fiancée leaves him for another man, he finishes the film still in mid-recovery, and with a vague suggestion hanging in the air that he may enter a romancer with Minegishi instead. It's a nice ending, one that suggests the potential of a much stronger and more ambivalent sort of drama than the film to which it's attached.

As the saying goes: 'they can't all be gems'. This is second-rate Kurosawa.