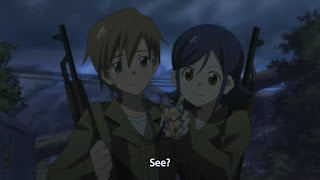 Following the latest AKB concert, an unexpected announcement is made: both the trainees and the successors will perform concerts on the planet Lancastar. It is Nagisa, Yuka and Orine's home planet, and the first time they have returned there since their adventure began. Nagisa is assigned a solo song - usually only assigned to someone receiving a promotion. Yuka gets a message from a friend begging her not to return.

I haven't reviewed an episode of this series in almost 10 months after the last one, "Miracle of the Waves", indulged in exactly the sort of leering creepy exploitation of teenage girls that previous episodes had largely avoided. Thankfully this episode seems as if the ship has righted itself: it's colourful, weird, and extremely emotional.

There is so much that happens in AKB0048 that makes absolutely no sense whatsoever: like announcing to the public that the trainees will perform a concert on Lancastar without fore-warning the trainees. Then again we are talking about a series where armed government forces violently resist Japanese girl groups from staging pop concerts, so one probably should expect much in the way of logic. Instead what he get is pop music and teen soap viewed through a surreal sci-fi lens.

Nagisa is awarded a solo number in the trainee concert, and is immediately crippled by the arch-nemesis of every teenage protagonist in Japanese pop culture: self-doubt. Chiera is struck by jealousy and guilt at the same time, since she wanted a solo but also wants to be happy for her friend. Meanwhile Yuka is told by a friend, Mamoru, not to return to Lancastar, and that upsets her deeply. Takamina continues her struggle to return to full health so she can defend the groups during the concert. Finally, the mysterious S-Quadruple has written a new song - the first in a long while - only it's been written for the trainees, putting successor group leader Yuko's nose out of joint.

Basically no one is happy. At times you do want to vigorously shake each protagonist out of her ennui, in the hope that she'd realise she's a pop star in space, but overraught emotional trauma is kind of the hallmark of this sort of anime. It does what it does very well, even if there is some confusion from having three characters in the one episode named Yuka, Yuko and Yoko.

This show would be such a guilty pleasure if I believed in guilty pleasures. Instead it's just gloriously silly with such a ridiculous straight face. 11 episodes in, and eight have been good: for me the quality ratio is 73 per cent. For you, the ratio is really going to depend on how breezy, silly and emotionally melodramatic you want your animation to be.
Posted by Grant at 7:39 AM