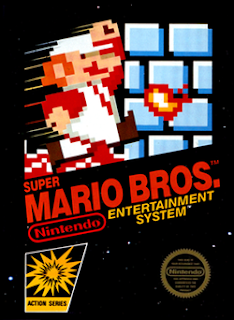 Okay, so not actually my top pick for the NES, but almost inarguably the most iconic title on the list. Super Mario Bros didn't just define the NES, it defined everything Nintendo produced from the moment of its release right up to the present day. I have no doubt than in another 30 years it will still have as much influence over the company, its games and characters, and its outlook. If we're going to avoid unnecessary hyperbole, we should try not to use words like 'masterpiece' and 'legendary', and if we did do that, then those words would be free to use when they really applied - like they should with Super Mario Bros, which is both legendary and a masterpiece.

Mario, of course, started life as the hero of Shigeru Miyamoto's landmark arcade game Donkey Kong. From there he moved on to his own title, Mario Bros, which introduced his brother Luigi as a second player character. Mario Bros was a single screen arcade game, in which players jumped around a set of sewers, stunning and eliminating rogue turtles and insects as they roamed about. When it became clear that Japan's Famicom console was going to be replaced with the new Famicom Disk System, Miyamoto elected to give the retiring console one final game of which it could be proud: Super Mario Bros. 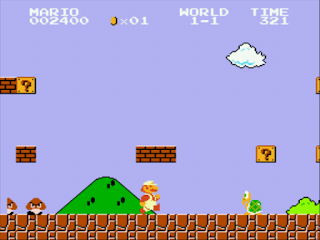 Rather than a single-screen arcade game, Super Mario Bros is a side-scrolling platformer. It is set in the magical "Mushroom Kingdom". Princess Toadstool has been kidnapped by a giant turtle-like villain named Bowser, and Mario has set off to rescue her. The player controls Mario as he runs and jumps his way through eight worlds, each boasting four levels. Each world climaxes with a castle, at the end of which Mario typically discovers that the Princess is being held captive in a different castle (spoiler: she's in the final castle).

There were side-scrolling platform games before Super Mario Bros, and there were certainly a lot of them afterwards. Where the game excels is simply in the manner in which it is perfectly designed and balanced. Level 1-1, for example, is a true masterpiece of design. It gently teaches the player exactly how to play the game without explaining itself, or hand-holding. The first time the player jumps up and hits Mario's head on a block it produces a red mushroom. That mushroom, which is almost impossible for the player to avoid hitting, magically increases Mario's size. In one instinctive, near-accidental movement, the player has learned that they should jump up and hit blocks, and that they should grab mushrooms and other power-ups when they appear. The whole level is like that: each element perfectly positioned, the entire level perfectly arranged and at a perfect length.

Super Mario Bros was so popular that it has appeared, in one form or another, on every Nintendo console since the Famicom. When it was released for the NES in 1985 it became the console's signature game. To date it's sold more than 40 million copies worldwide. The Super Mario franchise continues to go strong today, with an almost incalculable number of spin-offs along the way.

This game is the template for Nintendo: cute, suitable for all ages, slightly weird around the edges, and perfectly balanced to provide entertainment for casual players and a proper challenge for the experienced gamer. It is, without exaggeration, one of the greatest videogames of all time.