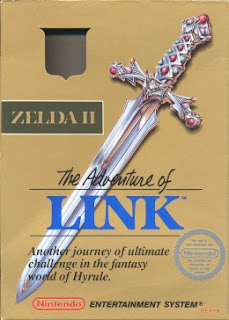 For many years The Adventure of Link has been marginalised by fans of The Legend of Zelda. It's often perceived as the 'odd one out', thanks to its strikingly different gameplay and style to the original. Rather than present itself as a top-down adventure, it divides its time between a Final Fantasy-style world map and a series of side-scrolling platform levels. It also brings in RPG-style character progressions, as defeating monsters earns experience that can then be spent to power up Link's abilities.

It is true that The Adventure of Link, which is the second of the Legend of Zelda games, offers a fairly different gaming experience to the bulk of the franchise. That said, I personally find it an immensely satisfying and enjoyable game - even more so that the original that it follows.

The Zelda games have a very jumbled, almost nonsensical sense of continuity, with each title reflecting elements of its predecessors rather than acting as a string of direct sequels. That trend does appear to begin here, with Link appearing to be older than his first appearance and tasked with rescuing a sleeping princess who, while named Zelda, is not the same young woman as in the original game. 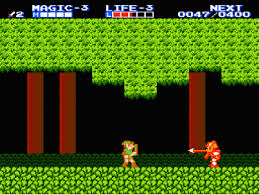 As always it's the gameplay and not the storyline that makes Adventures of Link such a creative success. The game features a series of palaces through which Link must fight, as well as a world map filled with shortcuts, caves, tunnel networks and all manner of secret areas.

The Adventure of Link was developed by a different team of programmers to the original, although creator/producer Shigeru Miyamoto and designer Takashi Tezuka both continued in their roles. Like many NES titles it was originally developed for the Famicom's Disk System before being ported with minor adjustments to the NES. Upon its release in 1988 it a huge seller, ultimately becoming the fifth highest-selling title for the NES (after three Super Marios and the original Zelda). The bulk of Zelda fans may overlook or criticise The Adventure of Link, but I am not one of them. This is a genuinely great videogame.
Posted by Grant at 7:39 AM