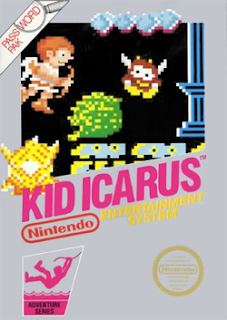 I received an NES console relatively late in the day. While the console was released in 1985 it was actually in about 1991 that I received a second-hand console and games as a birthday present. There were two games with the console: Tennis, which was relatively rubbish, and Kid Icarus, which remains one of my favourite videogames of all time.

Kid Icarus was released in Japan in 1985, and in the rest of the world in 1987. It's a platform game in which the player controls Pit, a winged fighter with a bow and arrow who fights his way through three different worlds to save the goddess Palutena from the evil Medusa. This Greek mythology-inspired game offered wonderfully cute characters, varied and challenging gameplay, and a bunch of ear-worm musical themes.

Three worlds: the Underworld, the Over World and the Sky World. The first and third worlds are vertically scrolling levels. The second is horizontally scrolling. At the end of each world is a maze-like fortress in which the player must collect enough power-ups and free enough companions to defeat the end-of-level boss. The game is packed with odd enemies to fight, including weird bugs that rise up from the ground to shoot at you, and hyper-alert grim reapers watching for you to come within sight so they can call their army of flying mini-reapers to attack. My personal favourite was the eggplant wizards, who would haunt certain rooms in each fortress hurling eggplants at passers-by. Get hit and you're turned into a walking eggplant, and have to retreat back to a hospital room to be changed back to normal and recover the ability to use your weapons.

Kid Icarus was developed by Nintendo's R&D1 team, and was produced by company legend Gunpei Yokoi. It ultimately shared much of the same development team as Metroid. To my mind there were four great franchises established by Nintendo on the NES: Super Mario Bros, The Legend of Zelda, Metroid and Kid Icarus. For some reason Kid Icarus has struggled to match the popularity of the other three series. There was a Gameboy sequel in 1991, and then nothing at all for 21 years until the release of Kid Icarus: Uprising for the Nintendo 3DS in 2012.

It's still one of my favourite videogames: not just for the NES but for any console. It's comfort food: I can load it up, sit back, and play World 1-1 almost by muscle memory.
Posted by Grant at 4:55 PM