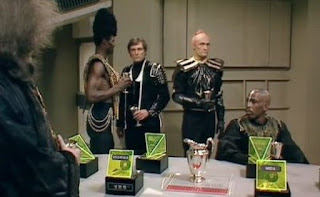 The time has come to strike back: as the Federation's drug pacification program expands, Avon (Paul Darrow) assembles an alliance of independent worlds in the hope of mounting a full-scale offensive. Their success hinges on the participation of Zukan (Roy Boyd), the militaristic leader of the planet Betafarl - only Zukan has already betrayed him.

"Warlord" pulls together the Federation story arc for Season 4 and gives it a fairly definitive climax. Avon has the cure to Pylene-50, Zukan has the ability to mass produce it, and an assembled group of planetary leaders and governors are willing to present a united front and stop the Federation's runaway expansion. It's an odd beginning to a Blake's 7 episode, with this alliance already formed and discussing bringing Zukan into the fold. It's simply unusual to see one of Avon or Blake's plans already be so successful. At its heart Blake's 7 is always an episode about failure; to see Avon already so close to achieving his goal is a slightly odd experience.

Avon shows his rebel alliance a video recording of just how far the Federation's drug pacification program has come. It's a horrific little short film, with Federation soldiers randomly shooting drugged-out civilians for kicks. It simultaneously brings to mind both the Holocaust and Orwell's Nineteen Eighty-Four, and seems a major step further into blunt totalitarianism than we've previously seen in the series. It does an excellent job of raising the stakes.

Sadly the costuming of Avon's new friends does an excellent job of lowering them. Put simply: they look ridiculous. Flowing robes, silly hair, colourful helmets. They all look so ridiculous - even by Blake's 7 standards - that they even make Zukan look quite normal when he arrives, and he has hot pink hair pulled back into a bun. Roy Boyd does a remarkable job of overcoming his silly hairstyle during this episode, and makes for a solid villain.

And of course he's a villain. As I said, Blake's 7 is all about failure, so it's no surprise to see that he has already betrayed Avon and the alliance to Servalan (Jacqueline Pearce) before he even set foot on Xenon Base. He shares a brief scene with her, which - not intentionally, I might add - is Servalan's final appearance in the series. Pearce does a nice job of it, particularly with her fairly calm reaction to Zukan's mad threat to switch sides and team up with Avon instead. He's pretty much a dead man walking from then on.

Less convincing is Bobbie Brown as Zukan's daughter Zeeona. She's cursed with even sillier pink hair, but she also delivers a severely lacklustre performance. Her romance with Tarrant (Steven Pacey) is fairly unconvincing and weakly written, although to his credit Pacey does his best with poor material. Pacey also struggles with Tarrant's constantly-shifting personality. For some reason he's regressed in this episode back to the arrogant bully of Season 3. He even gets to push Vila (Michael Keating) around again.

The episode's main plot sees Zukan's sabotage cripple Xenon Base, and leave Tarrant, Dayna, Vila and Zeeona trapped with falling oxygen supplies and a fast-approaching radioactive virus that will turn them into skeletons (for the record, I have absolutely zero idea how that even works). Meanwhile Avon and Soolin are hours away en route in Scorpio to Zukan's home planet of Betafarl - and another trap. It all gets rather tense towards the episode's climax, as Tarrant and the others run out of options and Avon and Soolin are simply too far away to reach them in time.

This is not a great episode, but it's an entertaining one - and it does provide a neat if dispiriting climax to the Season 4 story arc. By episode's end Avon's alliance is in tatters and Xenon Base is severely damaged - if he can't find a new figurehead to lead his alliance in Zukan's place, his new rebellion is doomed.

We're 12 episodes into the season with seven good ones so far, and a quality ratio of 58 per cent.
Posted by Grant at 5:12 PM