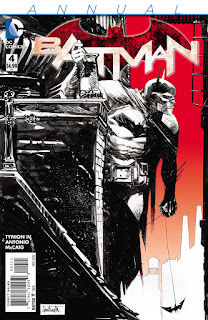 Time for another Batman annual it seems - the fourth since the New 52 rebooted DC's entire superhero line. This issue's an interesting one because it focuses not on Batman - currently performed by former police commissioner Jim Gordon - but on Bruce Wayne. He's an amnesiac these days: he has no memory of ever being Batman, and thus far no one including Alfred has broken the news to him. Here we see him retake custody of Wayne Manor after it was briefly used to house Gotham's criminally insane, only to find that not all of the inmates left as expected.

Writer James Tynion IV really feels like the heir apparent to Batman. He got his break co-writing with Scott Snyder, and moved to writing fill-ins and annuals such as this, and finally his own titles - including the excellent Boom Studios book The Woods. Here he once again demonstrates enormous skill in handling the Batman universe characters, and tells a nice self-contained story with a couple of genuine surprises.

Roge Antonio's artwork is expressive and strong: I don't recall seeing his work before, and would be very happy to see him illustrating a DC book again.

This is precisely what a comic book annual should be for: telling a great self-contained story that's a little bit longer than the usual issue, and giving talent the chance to play around with the big league characters they might not otherwise get the chance to handle. (4/5)

Under the cut: reviews of Aquaman, From Under Mountains, Godzilla in Hell, The Infinite Loop and Revival.

Aquaman infiltrates Atlantis to plead with Mera one more time. They make up, they have sex - and it turns out it wasn't ever Mera fighting him but instead her villainous sister. Plot twist! So this is not the greatest of issues. For one thing the plot centres on a sexual assault, which doesn't seem from the end of this issue that it's troubled Aquaman half as much as it should have. It also suffers from a fairly low panel-per-page count, not to mention three artists, so it's both brief to read and visually inconsistent. This book has not been impressing me since its post-Convergence shake-up. (2/5)

With Umbral cancelled and The Autumnlands on hiatus, it's nice to see Image launch an all-new fantasy comic book to keep me entertained. From Under Mountains introduces its readers to the isolated northern fortress named Karsgate, as well as a growing threat against its inhabitants. It's an intriguing first issue, but not an entirely gripping one. The story is solid but doesn't really present a well-structured narrative in this first issue. The artwork by Sloane Leong may impress some, but for me it seemed limited and under-developed. There's potential here, and I'm tempted to give it a second issue, but it all could be much better. (3/5)

In the latest issue of this wonderfully odd series, Godzilla faces Space Godzilla in what appear to be the ruins of Rio de Janeiro - only in hell. On the one hand this issue feels slightly less effective that the first two (each issue has featured a different artist or creative team). On the other it does feel that we're actually get some semblance of plot. Until now it's just been giant monster carnage and hellish imagery. Now there appear to be conflicting sides and some sort of celestial war that wants Godzilla in their respective armies. So less interesting on one level but more interesting on another. (3/5)

In the anomaly storage facility, Teddy makes her final attempt to preserve her and Ano's life together. This has been a beautiful and slightly strange science fiction romance, layered on top of a fairly huge subtext about how society continues to marginalise lesbians and their relationships. I've adored Elsa Charretier's animation-like artwork, which has felt highly reminiscent of Darwyn Cooke while carving out its own specific aesthetic. It all comes down to a pretty neat climax too. (4/5)

Em has been forcibly apprehended by the military and confined inside "the Farm", a Federal facility recently established to imprison and study Wisconsin's various "revived" human beings. This issue pushes us into a new act for Revival, entering the Farm and meeting its commander, a US general named Louise who's struggling at home with an unhappy son and an unfaithful wife. At the same time the issue devotes a solid number of page's to Em's worsening psychological condition: something is going to snap soon, and going by earlier issues it isn't going to be pretty. Dark, unsettling, rural drama is pretty much Revival's stock-in-trade, and this issue does it very well. (4/5)
Posted by Grant at 8:08 AM