Doctor Who: "Before the Flood" 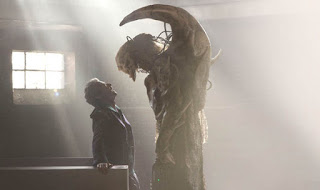 If an episode of Doctor Who begins with an explanation of a nonsensical paradox (the 'bootstrap paradox' if you want to look it up), and then uses that exact paradox to resolve its plot - should we consider that clever writing or lazy? It's pretty much the core of Toby Whithouse's script, the second part of a two-part adventure that began with last week's "Under the Lake". He's like a stage magician who explains how he hides the rabbit before suddenly pulling it out of a hat. What seems ridiculous in retrospect is that the gambit works: "Before the Flood" is yet another great episode of Doctor Who that seems dramatic, exciting and surprising, right up to that point when you suddenly realise the Doctor explained the ending to you before it started. It's the trickiest kind of writing: the kind that tells its audience what's going to happen, and then does it, and still makes it entertaining to watch.

With Clara still trapped by ghosts in a 22nd century underwater base, the Doctor has travelled back in time to the late 20th century - where the alien spacecraft has just landed. There he encounters the terrifying Fisher King, and learns its plans to invade and dominate the Earth.

The Fisher King is a marvellous creation, played in an effective combination by physical performer Neil Fingleton (who is 7 feet 7 inches in height), voice actor Peter Serafinowicz, and heavy metal vocalist Corey Taylor. It has a presence on screen that Doctor Who's monsters haven't had in a while, and I'd be happy to see a future exploration of its race and origins. Let exciting are the mouse-like Tivoli, represented here by the undertaker Prentis (Paul Kaye). They were last seen back in Season 6 in Toby Whithouse's earlier story "The God Complex", and they seem a bit of a lame joke rather than an intriguing alien species.

The storyline surprised me quite a lot this week, because everything in "Under the Lake" pointed to an "everybody lives" ending, in which the ghosts are revealed to not be what they seem, and everybody who had died somehow coming back to life. Instead Whithouse charts an unexpected new course, and manages to not only surprise but give the episode a fairly dark, grim edge to it. People do die. They don't come back. The dead are precisely what they seem.

It's a bravura piece of storytelling in the end, not only solving the problem by using a time paradox, but also directly referencing that the paradox has occurred and openly admitting that it makes the entire story a bit of a cheat. It's one of the things Doctor Who does at its best: use very smart writing to tell charming nonsense. By throwing in creepy ghosts and the monstrous Fisher King, it's pretty much archetypal Who. It even has people running away down corridors.

The story begins and ends with direct address: Peter Capaldi's Doctor staring right down the barrel of the lens and explaining important background information to the audience. At the end, with the Doctor only knowing what to do because he'd witnessed himself doing it, he gives the audience a final glance and an arrogant little shrug. It's a perfectly constructed moment: yes the story ultimately hinges on a paradox, but in the end did you really care?

Four episodes into Season 9, all of them fantastic. I'm really liking Doctor Who this year.
Posted by Grant at 10:52 PM