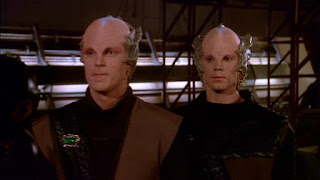 Two Minbari rangers-in-training make their first journey to Babylon 5, and wind up in more trouble than they had expected. A new player appears on the scene in Down Below, with aspirations to take over all the criminal enterprise on the station. Garibaldi (Jerry Doyle) grows suspicious of Captain Lochley (Tracey Scoggins) and her allegiance during Earth's civil war.

As far as fifth season episodes go, "Learning Curve" seems be a much more consistent affair. It doesn't really embarrass itself anywhere, none of the performances are particularly annoying, and the script is reasonably paced. That said it's still a slightly off-kilter episode, since in the main it doesn't focus on the regular cast but rather the two Minbari apprentices Rastenn (Nathan Anderson) and Tannier (Brendan Ford). That makes two weeks in a row of seeing Babylon 5 for a different perspective, which is a bit unexpected. To be honest I could actually enjoy this approach for a whole season: new characters each week with the regulars pushed into the background for a while.

The episode provides a valuable perspective on the Minbari post-civil war. There are members of all three castes training as rangers and living among one another, and the previously hostile antagonism seems to have already turned into a sort of good-natured bickering. This is typified in part by Turhan Bey and Brian McDermott as Turval and Durhan, the two elder Minbari who accompany Rastenn and Tannier to the station. The episode seems to round the Minbari off somewhat, making them a more believable and likeable civilization: by the end of the war arc in Season 4 they were becoming quite difficult with whom to engage. That said, Delenn's insistence that Tannier, once badly beaten, but return to Down Below to mete out a violent revenge, is pretty unsettling. It does actually fit with her character, but it's unexpectedly medieval of her.

Less convincing is Garibaldi's discovery that Captain Lochley served on President Clark's side during the Earth civil war (it's all post-civil war stuff this week). Part of the problem is Lochley herself: she's such an obvious last-minute replacement for Ivanova that she's never had the chance to impress on the audience. The other part is the manner in which the Season 4 episodes treated those serving under Clark against Sheridan. Despite some attempts by J. Michael Straczynski to be a little even-handed, they were unavoidably treated as villains with numerous human rights abuses, murders, illegal acts and so on. To make Lochley a starship captain from that side suggests she's a particularly unlikeable sort of officer, and brings into question why Sheridan would personally appoint her to command the station.

This is by no means a classic episode of Babylon 5, but it does hold together reasonably well and does seem to have something to actually say and do about the series and its fictional universe. After several deeply shaky episodes this season, playing it safe for a week actually seems like a reasonable approach. The quality ratio rises to 60 per cent: three good episodes, two bad.
Posted by Grant at 7:00 AM