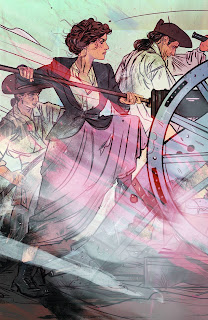 Some years ago I adored Brian Wood's viking-based series Northlanders, published by DC Vertigo. Rather than followed a specific set of characters it jumped around in terms of period and geography telling both multi-issue story arcs and self-contained one-shots. This appears to be the approach he is taking with his new historical series Rebels: after six issues devoted to Seth and Mercy Abbott, we now get a new story based around camp follower Sarah Hull. It's still based around the American Revolution - just a different part of it.

This is an incredibly effective issue, squeezing in a remarkable amount of depth and character into just a handful of pages. It's warm, dramatic and ultimately very sad - not to mention rage-inducing. There is an unpleasant familiarity to the story's final pages, which contain an unjustifiable bias that sadly rings true today almost as much as it would have back then. It's a fabulous script by Wood, who gives it all exactly the sort of cold, awkward treatment that such an epilogue requires.

Guest artist Matthew Woodson provides realistic, cleanly laid-out artwork. It accentuates the character's emotions, albeit at a small cost to the action - in a few places scenes feel just a little bit stiff.

Historical fiction is a genre with so much potential in comic books, and Rebels is a fantastic example of why. Great stories, beautiful art, and an insight into events in the real world. I really hope a few more series like this develop in the future. (5/5)

Under the cut: reviews of Batman, Ninjak and Star Trek/Green Lantern.

This is a slightly odd issue, with a fairly inconsistent rhythm to it. On the one hand Bruce Wayne attempts to find a way of healing the wounds caused by "Endgame" on a community of orphaned and relocated children. On the other Jim Gordon faces being fired from the GCPD's Batman project, until the unexpected arrival of the much-rumoured and mysterious criminal Mr Bloom. He's a deeply disturbing character, with a rather graphic means of killing his victims. It's well illustrated, and certainly it works from moment to moment, but as a complete package this issue feels a little weak and erratic. (3/5)

Ninjak's pursuit of the Weaponeer organisation continues. Stephen Segovia and Ryan Winn's artwork is really strong, giving all of the characters a very clean, idealised look and telling the story from a variety of different angles and distances. It has a nice dynamic look. Matt Kindt's script, however, is dominated by a lengthy narrated flashback that - while filling in the back story on Ninjak's current target - kind of sucks the momentum and tension out of it. It's an okay issue, but not an outstanding one. (3/5)

What initially seemed a fairly cool idea for a crossover has degenerated into a series of different coloured ring wielders punching each other. It's taken a lot of continuity from both Green Lantern and Star Trek, and for some readers it may be enough to see Kirk team up with Hal Jordan, or General Chang join forces with Sinestro, but for me it's all a massive wasted opportunity. This is a case where a little bit of continuity crossing over would have gone a very long way. This is basically just overkill: fan pornography in the place of a story. There's decent art, but not a good story. (2/5)
Posted by Grant at 7:00 AM