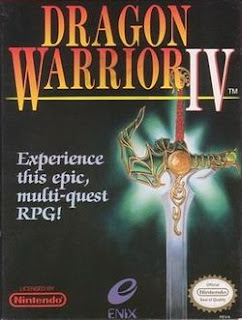 Through the 1980s and 1990s there was basically two key role-playing game franchises fighting it out for supremacy on Nintendo's consoles. Square's Final Fantasy stood in one corner, and in the other stood Enix's widely acclaimed Dragon Quest. There were four Dragon Quest games produced for the Famicom, and all four were ported over and translated for the NES in North America under the name Dragon Warrior. The first game debuted in 1989, and was followed by a second in 1990, a third in 1991 and a fourth and final NES title in 1992.

The gameplay was familiar to anybody who had played a Japanese role-playing game (RPG). Players controlled a group of heroes fighting their way across a fantasy kingdom. They travelled via a top-down map screen, entering towns and villages to rest and buy equipment, and journeying into dungeons to kill monsters, gain experience and progress to further areas of the world map. Where Dragon Warrior IV differs from its competitors is in its story, which is unexpected, original and groundbreaking: you control not one protagonist, but five.

The game begins with the player controlling a knight embarking on a quest. Before that quest gets too far, the game suddenly jumps over to another part of the world and begins again: now it is about a princess setting off to save her father. Then it's about an aspiring merchant, and then two sisters, and finally on a young man whose village has been destroyed by monsters. It's this young man who then encounters all of the heroes from the previous chapters of the game and unites them to defeat a terrible reawakened evil that threatens the world.

So while the gameplay of Dragon Warrior IV is no great advancement over its predecessors or competitors, it offers a quantum leap in storytelling and character development. It actually feels like a proper story for once, and as such feels like a much more fascinating and addictive game. Sadly it was never released outside of the USA and Japan: European and Australian gamers would have to wait until a 2007 Nintendo DS remake to legitimately play the game. It has subsequently been released for smartphones as well.

While the Dragon Quest games continued apace in Japan, Dragon Warrior IV was the last game to get an English-language translation until Dragon Warrior VII in 2001. Dragon Quest continues to be a hit franchise today, both in Japan and internationally. Dragon Quest XI is currently scheduled for release some time in 2016.
Posted by Grant at 8:32 AM