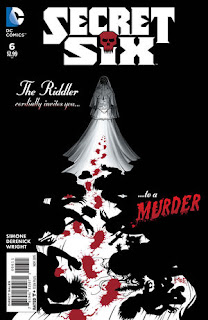 September is usually a massively successful month for DC Comics, as their regular titles make way for some kind of special stunt: zero issues, "Villains Month", "Futures End", or some-such. This is the first year since 2011 that DC hasn't gone for such an event and as a result the sales figures seem much more ordinary. Individual issues a little down, as standard sales attrition takes effect, with just a few odd books doing something different.

On the face of it, the biggest shock among the DCU titles is definitely Secret Six. This relaunch of the pre-New 52 villain-centric series by Gail Simone suffered from protracted delays in its first few issues, managing to bring out only six issues in ten months. Issue #6 has seen an unprecedented decline in sales, from an estimated 30,418 units in August down to just 17,376 in September. That's a 43% drop. The average decline from a 5th to a 6th issue, by the way, is 7.7%. So what happened?

Basically DC's regular alternative cover programs are masking the declines of individual titles. If you ignore the August issue, you get a fairly predictable decline for a book from 44,000 units at launch, down to 28,000 by issue #3 and 23,000 by issue #4. That decline all gets fouled up by August, which featured an alternative "Bombshells" cover featuring popular character Harley Quinn. As a result an additional 8,000 collectors pick up a copy. It's another case where you can see why DC pushes their alternative covers program so regularly: it's basically money in the bank.

A quick look at the monthlies launched in June shows some clear losers: Doomed down to 9,527 units, and Prez down to 9,931. It's not the worst-selling pair of issue #4s DC has had in recent years (still beaten by The Green Team at 8,493 or Klarion at 6,776), but certainly it's further justification for DC in cancelling both books.

There are some worrying declines elsewhere in the line, with three long-running monthlies all suffering their lowest sales figures ever since the New 52 kicked into effect. At 26,396 units, Aquaman had the lowest sales of its entire 48-issue run. So did Batgirl, with an estimated 30,654 units, and even Green Lantern with 39,371.

Back to the June launches, and at least two of the new books look like they've stabilised their numbers. Robin: Son of Batman appears to have stabilised at around 38,000 units. Black Canary is on similar ground, having sold about 23,000 copies for the last two months. Among the older books Action Comics seems pretty flat at around 37,000, which must be heartening for its creative team (Greg Pak and Aaron Kuder).

So which books remain in danger? Books coded 'orange' are selling between 20,000 and 30,000 copies a month, so there's a good chance DC is keeping a very close eye on them. Books coded 'red' are selling less than 20,000 copies and are in immediate risk of cancellation. Books coded 'black' are dead in the water with less than 10,000 copies shipped. Cancelled titles and miniseries are highlighted in bold: most of these books only have another two issues to go.