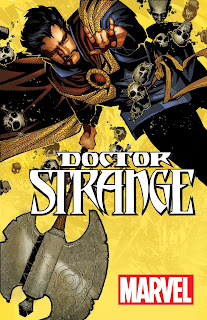 I basically have two favourite Marvel superheroes: the Incredible Hulk and Doctor Strange. Now obviously the Hulk is remarkably well served, with an ongoing (albeit regularly renumbered) monthly comic, plenty of guest appearance in other characters' books, a 1970s live-action TV series, cartoons, two feature films and a pair of high profile appearances in the Avengers movies. Doctor Strange, however, is not quite so well provided for. For one thing I don't think he's headlined anything longer than a four-issue miniseries since the mid-1990s. He does have a feature film coming in 2016, which is probably why he's finally got a book of his own again. I'm very grateful he's back.

There are so many reasons I adore the character. For one thing: that's not a superhero alias, that's actually his name. Dr Stephen Strange, a gifted surgeon who ultimately learned to master magical powers and become New York's best line of defence against the occult. The enemies he fights are weird inter-dimensional things, and his adventures are regularly as bizarre and odd as his name might suggest. His costume is brilliant, and he rocks a cape-and-moustache combo like nobody's business.

This new volume comes via outstanding writer Jason Aaron, who managed to revamp and redevelop Thor in recent years with tremendous success, and fan-favourite artist Chris Bachalo. I'm really hoping this issue is a hit with readers, because I'm rather keen on having a monthly Strange hit again.

Oh yeah, the issue itself: it's essentially a prologue, promising a big dramatic story arc in the future, but simply taking its time for now and re-introducing Strange. That's actually a very good approach, and Aaron writes a good version of the character: a little less divorced from reality, and a little more approachable. Chris Bachalo does some great stuff with the artwork, particularly Strange's transforming clothes that allow him to walk down the street without looking like a weirdo in a costume. I'm hooked, but then in all likelihood I was going to be. I mean, it's Doctor Strange! (4/5)

Under the cut: reviews of Action Comics, Darth Vader and Detective Comics.

Superman remains in hiding after the alien Wrath - who draws power from the anger of others - trashed Metropolis in the hunt for him. This is the first issue of a new storyline, clearly following on directly from the last but also giving new readers a handy jumping-on point. I'm really liking this run on Action Comics. Greg Pak has an outstanding handle on Superman's personality and outlook, and Aaron Kuder's artwork has been really strong and distinctive. This issue, however, has guest art by Scott Kolins. Three years ago I was writing extremely negative reviews about Kolins' work on Legion of Super-Heroes, but I have to say he's developed enormously as an artist over the past few years. His work here is great: it echoes Kuder's own style a little while forging its own personality. (3/5)

The best thing about Gillen's writing on Darth Vader is the manner in which he carefully blends together the Darth Vader of the original Star Wars trilogy with the Anakin Skywalker of the prequels and The Clone Wars. It's a delicate tightrope to walk, but here we are on the tenth monthly issue and he honestly hasn't slipped up once. He's also visibly careful not to over-use Vader in the book: a little goes a long way. Instead he's built a growing cast of supporting characters around him, to pick up the slack, help drive the plot, and - most usefully - react to Vader's calm villainy. This is the best Star Wars comic ever published, and by a growing margin. (5/5)

Tomasi takes over Detective Comics: whether temporarily or permanently I have no idea. He begins with a still-amnesiac Bruce Wayne receiving a visit from the Justice League. In the second half Jim Gordon, now assuming the role of Batman in Wayne's absence, has his first encounter with the League. It's entertaining stuff without being exceptional. Marcio Takara's artwork is fairly solid, and certainly shows a lot of potential. I'd love to see his work develop over a couple of issues - I think he's onto something pretty good. (3/5)