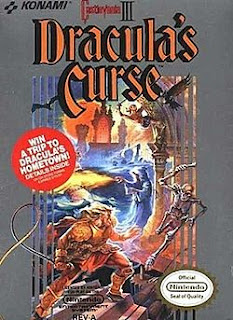 I've already covered both Castlevania and its sequel in this countdown, so I suppose it's a sign of how good this series was that I'm now covering the third Castlevania game for the NES, Dracula's Curse.

The things that made those games successful are still very much in evidence here: an evocative horror setting, crisp and appealing graphics, strong and precise gameplay, and the non-linear structure that adds complexity and a richness that other platforming action games didn't have. So why is the third game superior to the first and second?

To a large extent the improvements are iterative. The graphics are more advanced and attractive. The gameplay is refined and developed nicely. The non-linear world map and the RPG-like method to purchase equipment and improve the character have been abandoned, but the overall non-linear structure remains: it's up to the player to choose which sidekick they employ to help them in their quest, and in which order they wish to complete the game's 15 levels. Basically Dracula's Curse has made a deliberate shift back to the pure platforming action of the original Castlevania, but at the same time has kept the flavour of Simon's Quest's complexity. It presents the best of both worlds.

The game's story moves several centuries beyond the earlier titles, with the player controlling not Simon Belmont but his descendant Trevor. It also introduces Dracula's son Alucard, who becomes the central figure in the PlayStation title Castlevania: Symphony of the Night, which remains arguably the best single game in the whole series.

Dracula's Curse was first released in Japan in 1989. The USA received the first NES copy in 1990, but European and Australian audiences were left to wait until 1992 to play the game. Ironically by that point the Super Nintendo Entertainment System (SNES) sequel Super Castlevania IV had already been available for three weeks. To an extent it led to this excellent game being somewhat overlooked in those markets.
Posted by Grant at 9:20 AM