Babylon 5: "A View from the Gallery" 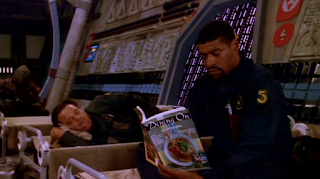 Mack (Raymond O'Connor) and Bo (Lawrence LeJohn) are two technicians working on Babylon 5. Over the course of one day they repair various computers, machines and equipment while the station comes under attack from a mysterious alien race.

"A View from the Gallery" is reportedly a divisive episode among Babylon 5 enthusiasts. It features many of the elements that made the series popular with its fans - space battles, noble sacrifices, emotional and thoughtful monologues - but it presents all of them through the eyes of two ordinary workers. The episode doesn't so much happen as run past. We see glimpses of what would be the main story, but never really get context or detail. Instead we get a glimpse of life for the 'little people'. Mack and Bo aren't space pilots, or rangers, or diplomats. They're the guys who get called with a toilet becomes clogged, or a light fixture breaks. For some, watching two new characters meet and talk about the regular cast is going to be frustrating and even annoying. For others it's going to be a refreshing change. I'm most in the latter camp.

I'm a little on the fence with this episode, in that I love the conceit but am less impressed by its execution. I genuinely love the whole concept of showing a pitched attack on the station through the eyes of someone unable to actively join in the defence. I love the thought of seeing Sheridan in the way ordinary station residents see him. It really is a fantastic idea, and feels rather similar to the excellent Star Trek: The Next Generation episode "Lower Decks" (a personal favourite of mine).

Then there are problems. The reduced season budget strikes again, with numerous scenes that should be packed with panicking extras running for their lives but are instead eerily wide open and empty. A lot of the acting feels under-rehearsed as well, particularly scenes between Sheridan (Bruce Boxleitner) and Delenn (Mira Furlan). The two leads, Mack and Bo, are rather thinly drawn and tend to fall back on stereotype. Their dialogue regularly becomes trite, with J. Michael Stracyznski's script often reaching for profundity and missing by a noticeable margin. Both Raymond O'Connor and Lawrence LeJohn do their best with it, and are both rather appealing performers, but they're working with one hand behind their back.

Londo (Peter Jurasik) and G'Kar (Andreas Katsulas) are relegated to a brief comic appearance, which continues to waste their characters. A mid-episode encounter with the telepath leader Byron (Robin Atkin Downes) does little more than demonstrate beyond doubt that Byron is actually a really irritating character. There is some nice material with Dr Franklin (Richard Biggs), that boasts not only a decent performance but solid writing as well.

So there's a lot to criticise here, but there's also quite a bit to applaud. It really is a clever concept for an episode, and it's broadly entertaining despite its flaws. It marks the second enjoyable episode of the season out of four. The quality ratio rises to 50 per cent.
Posted by Grant at 7:26 AM