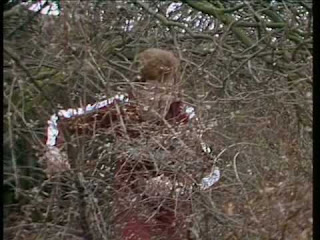 Anne (Louise Jameson) gets on a train from Edinburgh to visit a renowned psychological research facility. She doesn't get off at the other end. When he is once again blocked at every turn by his employers at Department 7, Tom (James Hazeldine) takes matters into his own hands to track Anne down and rescue her.

"After-Image", which was written by Sean Hignett, is a nicely-paced and cleverly plotted little thriller. It tells its own gripping story while pushing the overall storyline of the series forward much further than one might expect. It is also very effectively directed by Gerald Blake, and overcomes a visibly low production budget in an effective and experienced fashion.

Each episode of The Omega Factor seems to explore a different aspect of the occult or the paranormal. We've had telepathy in "The Undiscovered Country", poltergeists in "Visitations", and sonic weapons in "Night Games". This time around the subject matter is sensory deprivation and brainwashing. Anne wakes in an isolated and secret facility in the belief she is at the French psychology institute that she was trying to visit in the first place. She thinks she is there to study new methods, but instead is the unwitting subject of an experiment to brainwash her to work against her Department 7 masters.

There's a hell of a lot going on by the end of this episode, and it's a credit to the production team and the writer that it never gets confused or overly complicated. In short: there is an international arms race going on between nations to develop psychic powers. Whoever wins that race will likely control the world, and so competitive is this race that otherwise allied nations may work against one another. That is certainly the case here, as the United States are using a secret facility in British soil to brainwash British agents. What's more they're being assisted in their efforts by Edward Drezel (Cyril Luckham), the murderous occultist and psychic who very likely murdered Tom's wife.

More surprising than Drexel's return is his death: so far the series has positioned him as something of an arch-enemy to Tom, and his climactic shooting opens all manner of questions. In an oddly old-fashioned Agatha Christie-style moment, the lights go out when Drexel is shot. Was it the psychotic patient that he had failed to brainwash? That's certainly the official line, except at the episode's beginning Anne finds a gun in the glove box of Tom's car and she stares warily at the closed box when she and Tom drive off at the end. Then there's Drexel's ring, which displays an omega symbol and is clearly highlighted when he dies. The series may have cut off its original villain, but it appears to be opening a much larger conspiracy at the same time.

The performances continue to be rather strong. Hazeldine and Jameson work very well together, and to a large extent pre-figure the Mulder/Scully relationship that made The X Files such a success 14 years later. Their employers Martindale (John Carlyle) and Erskine (Brown Derby) are also very strong, managing to express equal layers of integrity and suspicion-raising ambivalence. Four episodes in and it's difficult to tell which side they're on. Certainly they're both keeping a lot of unpleasant secrets. Guest star Bruce Boa is perhaps a little less convincing, partly because his French accent is a little weak and partly because it's difficult not to recall his most famous role as a disgruntled American in Fawlty Towers ("Waldorf Salad").

All up this is a neat little 1970s conspiracy thriller being done in Edinburgh on a shoe-string budget. Alongside "Visitations" it's the best the series has had to offer so far. With three good episodes out of four, the quality ratio jumps up to 75 per cent.
Posted by Grant at 5:59 PM