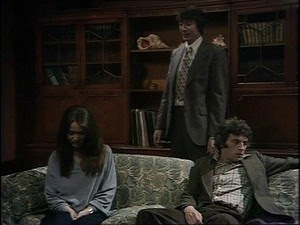 Tom (James Hazeldine) and Anne (Louise Jameson) travel out to the country to visit Anne's friend Maureen. Once there they find Maureen's son Colin (Max Harris) has been expelled from his boarding school after several unexplained instances of vandalism. Tom recognises the phenomenon as psychokinesis, and soon Colin is the subject of a vicious tug-of-war between Tom - who wants the boy left alone - and Martindale (John Carlyle) - who wants to use him for a series of experiments.

There is an interest premise at the centre of Tom Wright's script, but the execution struggles quite badly. Part of the episode's problem seems to be that Wright is unsure precisely what his episode is about: the risks of child exploitation? A conspiracy to use that child as a weapon? The horror of discovering your son is a monster? It plays with all three concepts, but doesn't actually zero in and properly address any one of them. As a result the episode feels like a missed opportunity.

It would have been better to have picked one angle at stuck with it. For the first half the entire episode is about Colin's welfare: teasing out from him what's going on, taking him to Edinburgh for tests, and then struggling to stop Martindale from over-using him in his experiments. Then it suddenly shifts gears into the idea that someone has secretly used Colin as a weapon. The first story approach is perhaps a little pedestrian for The Omega Factor. The second has huge potential, but simply doesn't get sufficiently explored. The third approach, a deeply creepy coda where Colin uses his powers to murder a man he doesn't like, has the best potential of the lot but feels thrown in at the last minute. Two of these balanced through an episode would have worked. Three racked up one after the other just makes the whole exercise a disappointment.

The episode also introduces a sudden jealous tension between Tom and Martindale. The former finds the latter socialising with Anne in her apartment and becomes oddly jealous and sulky about it. It doesn't ring very true for either character - Martindale's always employed a certain level to detachment from his colleagues, and Tom's never been this sullen or unlikeable. The actors struggle to make it work, but Hazeldine in particular isn't really able to do anything positive with what he's given. Carlyle gets better material, and therefore can present a much better performance. His growing unease late in the episode is very well played, as he comes to regret his enthusiasm in running Colin through the experiments.

The episode ends with another ominous reference to "Omega", but at this stage it remains just a catchword: there's no real development in terms of a story arc or mystery.

No series is perfect, and sadly "Child's Play" winds up being the second disappointing episode out of the six reviewed so far. The quality ratio drops to 67 per cent.
Posted by Grant at 5:52 PM