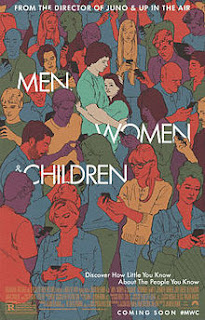 Jason Reitman has spent the last decade building a filmography of genuinely impressive, impeccably performed dramas and comedies, including Thank You for Smoking (2005), Juno (2007), Up in the Air (2009, and still his best work in my opinion) and Young Adult (2011). As a result I watched his most recent film, the 2014 drama Men, Women & Children, with fairly high hopes. Maybe it was the raised expectations, or maybe it simply isn't a good film, but it wound up being a fairly massive disappointment.

Men, Women & Children is an ensemble drama based around various forms of Internet addiction. There is Don (Adam Sandler) and Helen (Rosemarie DeWitt), whose sexless marriage drives one to online escorts and the other to a website hooking people up for affairs. Their son Chris (Travis Tope) is so addicted to online pornography that he can't find actual sex arousing. Meanwhile school football star Tim (Ansel Elgort) has quit the team and spends his nights playing Guild Wars. Tim's father Kent (Dean Norris) has started dating Joan (Judy Greer), whose enthused support of her daughter's aspirations to fame has somehow rabbit-holed her towards producing teen pornography. Tim has started secretly dating Brandy (Kaitlen Dever), whose possessive mother Patricia (Jennifer Garner) tracks everything she writes and receives online and follows her around town using GPS. If that wasn't enough there's also troubled teen Allison (Elena Kampouris) who visits pro-anorexia websites behind her father's (J.K. Simmons) back, and who fixates on the worst kind of boy in her class.

That's a lot of characters to squeeze into a single two-hour narrative, and I wonder if that's what led to the film's biggest problem. This is a worryingly superficial film that engages with the ideas of Internet addiction in fairly superficial and trite ways. Patricia isn't simply overly protective of her daughter's online activity; she's paranoid and controlling to the point of parody. Likewise Chris can't simply spend too much time watching pornography; he's so addicted he can't even get an erection when a classmate offers to have sex with him. And of course Don and Helen are both going to find sexual opportunities online and cheat on one another simultaneously. The clichés are piled high and wide, and it doesn't take long to start predicting plot elements before they appear. Of course one of the teenagers is going to commit suicide. Of course there's going to be an unwanted pregnancy. Of course there are going to be silent moments in hallways, and parents realise how badly they've failed their kids.

The story is framed by regular shots of NASA's Voyager space probe leaving the solar system, as well as extensive mention of Carl Sagan's commentary on the "pale blue dot" photograph taken by the probe. It's also calmly narrated by Emma Thompson. Altogether it gives the film a passive, detached manner that almost saves it from itself - but sadly not quite successfully enough.

The thing that frustrates the most is that despite the script mostly being as stereotypical and weakly drawn as one could imagine, the actors uniformly give it their all. There are some genuinely brilliant performances here, and in every case they're ultimately fruitless because the script betrays them. It's particularly sad to see Adam Sandler, usually considered a poster-child for the worst style of Hollywood studio comedy, give a sensitive and rounded performance as Don. Sandler is a good actor - anyone who thinks otherwise clearly never watched Paul Anderson's Punch-Drunk Love - and I'm always encouraged to see him attempting something more interesting than another comedy misanthrope or exaggerated idiot. Here he's sadly doing great work in a bad film.

Men, Women & Children isn't entirely without merit: it was engaging enough to sit through, and the performances really are excellent. It's even well photographed and paced. It just all serves a worthless screenplay, based on a novel by Chat Kultgen that I desperately hope has more subtlety and thought than Reitman and Erin Cressida Wilson's adaptation of it.
Posted by Grant at 7:03 PM