The Omega Factor: "Powers of Darkness" 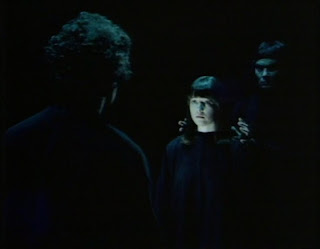 Four university students have been toying with the occult with disastrous effects. One of them is already confined in a hospital, and now another - Jenny (Maggie James) is having flashbacks to a past life. By the time Tom Crane (James Hazeldine) gets involved, in may be too late to save Jenny from the demonic power that looms over her.

"Powers of Darkness" is a surprisingly dark and horrific episode, even within the context of a paranormal series like The Omega Factor. It's script, by Anthony Read, is a clever mixture of elements - past-life regression, psychic powers and demon worship - and it is all directed very effectively by Eric Davidson. In fact it may have been too effectively written and directed, since "Powers of Darkness" is the episode that got The Omega Factor cancelled.

First and foremost, let's discuss the episode itself. Jenny and her friends begin the episode attempting a seance, and appear to contact a spirit named Effie. Subsequently one flatmate, Gavin (Simon Tait), attempts to hypnotise another, Alison (Desi Angus), only to accidentally hypnotise Jenny instead. In a trance Jenny re-lives a past life as Effie, a 16th century witch burned at the stake on the orders of King James. When she re-lives her execution, her boyfriend Ian - locked inside a hospital after a nervous breakdown - spontaneously combusts and burns to death, screaming and flailing. This is really dark stuff, and it gives the episode an edge that it largely retains even today, more than 36 years later. This doesn't even include the bit where the devil turns up.

Eric Davidson cleverly lights the episode very sparingly. It's most set at night, and is filled with shadows and dark corners. The episode's climax in particular is stunningly staged and paced, and is a marvellous piece of TV horror.

The episode continues the development of Tom and Anne (Louise Jameson). He's clearly pushing for a sexual if not romantic relationship, while she is resisting his advances pretty firmly. She's also increasingly concerned at Tom's growing obsession with Drexel. Even after that man's death he continues to dwell on his motives in killing Tom's wife - if indeed he was responsible for killing her at all. He's also now concerned with the signet ring Drexel was wearing when he died, one inscribed with an omega symbol. That symbol pops up again before the episode ends, as does Drexel's mysterious daughter Morag (Natasha Gerson) on more than one occasion. This growing story arc is an interesting one, because it's layered a few clues in but we're really in the dark as to what any of it means. It will be interesting to see how far the series will string the mystery along without providing any genuine resolution or progress.

Now for the controversy. In the 1970s there was a highly active and vocal lobby group in the United Kingdom known as the National Viewers and Listeners Association (NVLA) - now named Mediawatch. The group was fronted by a woman named Mary Whitehouse. Famously lampooned by The Goodies, Whitehouse challenged any television productions she and her organisation found inappropriate for children or morally repugnant. She challenged Doctor Who's content on more than one occasion, and upon the broadcast of "Powers of Darkness" she was quick to express her outrage. Here was a television drama, broadcast prior to the 9:00pm 'watershed', that featured people burning alive, threatening one another with knives, getting hypnotised, messing with the occult and worshipping the devil. Whitehouse protested to BBC management that the episode clearly breached their own content guidelines, let alone public morals.

For once Mrs Whitehouse was right. The BBC openly acknowledged that the episode, and a subsequent one, breached their own guidelines for content in prime-time drama programmes. Producer George Gallaccio was formally reprimanded and, when the time came, The Omega Factor was quietly refused a second series.

Opinions of Mary Whitehouse and the NVLA continue to be harshly negative, particularly among fans of Doctor Who - a series she praised for its imagination while condemning it for its excess violence. She tends to be mocked as some eccentric figure of fun, constantly complaining about sex and violence in an impotent fashion. The Omega Factor stands as the one case where, for better or worse, Mrs Whitehouse won. Not only did the series not get renewed for a second series, it was never repeated on British television, was never released on VHS and only resurfaced via DVD in the past decade or so.

This is nonetheless a remarkable episode. It leaves The Omega Factor at the halfway point, with four good episodes out of five and a quality ratio of 80 per cent.
Posted by Grant at 6:37 PM