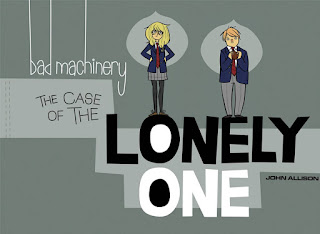 Lem is the new kid in school. He's weird and creepy. He eats raw onions. And, one by one, everyone is becoming his friend. Unless the rapidly depleting ranks of the 'mystery kids' can work out his secret, everyone as Griswald Grammar will be under his control.

That's the basic premise of "The Case of the Lonely One", the fourth volume of John Allison's webcomic Bad Machinery. I've never read the comiconline, but Oni Press have been collected each story arc together and publishing them in handsomely packaged paperback editions. This fourth book is out in stores this week. It's great.

Allison's cartoonish artwork is incredibly slick, and thanks to Adam Cadwell's colouring work it pops off the page. The book's tone is a weird combination of Hardy Boys novel, American teen comedy, and BBC series Grange Hill. It's set in northern England, which gives it a pleasant charm that really makes it stand out against similar humorous books.

This has a potential animated adaptation written all over it. I really hope some TV production house somewhere is paying attention to it. (5/5)

Under the cut: reviews of Back to the Future, Fistful of Blood and Star Trek.

Back to the Future #1

Released to coincide with the date Marty and Doc arrive in 2015 in Back to the Future Part II, this new tie-in comic certainly comes with a high pedigree: storylines and scripting by screenwriter Bob Gale - who, with Robert Zemeckis, wrote all three films in the trilogy. Sadly it doesn't ultimately seem that good. This first issue (four are planned) contains two short stories. One, set in 1982, details how Marty first met Doc - not something I ever needed to see. The other, set in 1943, details Doc's attempts to join the Manhattan Project. The artwork is better in the second story than the first, but all up this just feels like a weak tie-in. Well intentioned, maybe, but altogether a bit dull. One of hardcore fans and completists only, I suspect. (2/5)

Teenage Mutant Ninja Turtles co-creator Kevin Eastman and 2000 AD veteran Simon Bisley team up on a tale of zombies versus vampires in a western town, with a scantily clad, buxom gunslinger caught in between. This comic, which is a re-mastered and re-coloured edition of an older work, is one of those books that will likely please the fans of both creators, but will probably result it total disinterest from anyone not already drinking their particular brand of Kool-Aid. For me the book - particularly its tacky, leering treatment of its near-naked and large-breasted protagonist - left me entirely cold. There's talent involved, but in a genre and with a treatment I simply don't enjoy. (2/5)