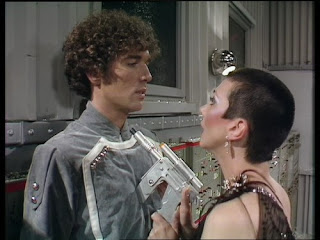 Five years ago a Federation science mission went silent on the planet Vern. Now an investigation is underway, commanded by the arrogant Reeve (Stephen Yardley) and including an incognito Servalan (Jacqueline Pearce). When Avon hears of the mission he dispatches Tarrant (Steven Pacey) to steal the mysterious scientific discovery from under the Federation's noses - only an unexpected presence on the planet leaves Tarrant and Servalan trapped in the base together.

"Sand" is an exceptional episode of Blake's 7. It manages to pull off multiple achievements at once. It tells an intriguing science fiction story. It enriches its lead characters, and develops them in fresh directions. It even presents an unlikely romance that, while truncated, is pretty much the most effective storyline of its kind since the series began. It's written by the noted fantasy author Tanith Lee, who also wrote the unusual Season 3 episode "Sarcophagus". For me "Sand" is the much stronger script.

Let's start with the science fiction element of the story, in which a seemingly desolate planet is actually populated by living sand. It can suck the life out of a human being like a vampire, and can slowly grow and spread around a room. What's more it is intelligent: it can imprison human beings to act as its breeding stocks. Five years before the episode begins it decimated an entire Federation survey, leaving only a man and a woman behind. When she committed suicide, it quickly moved in and killed him - without a woman with whom to breed, he had simply become food. This is the most effective horror that Blake's 7 has ever done.

There's a particularly creepy moment late in the episode when Tarrant points out that there's no wind. The roaring sounds everyone has been hearing for the entire story isn't the sound of a gale blowing over the surface: it's just the sand.

Servalan has come to Vern not for its scientific secrets but because the original survey leader, Don Keller, was her first lover. It's a significant episode for Servalan, giving her an edge of humanity and demonstrating why she's spent the entire series hiding it so effectively. I loved Servalan in Seasons 1 and 2, and hated how she was aggressively sexualised in Season 3 at the expense of her previous strength. This episode finally ties those two halves of the character together.

In the episode's second half Tanith Lee sets herself a near-impossible task: developing a whirlwind romance between Servalan and Tarrant. She's been trying to kill him and his companions for close to two years now, and has already had his brother murdered. While their scenes may stretch credulity a little it's amazing they didn't stretch them more. This is a genuinely effective twist for both characters.

This is the best episode of Season 4 so far, with good science fiction and strong character work. If only Lee had managed to write another episode before the series was cancelled. With this we've hit four good episodes out of nine, and a quality ratio of 45 per cent.
Posted by Grant at 10:55 PM